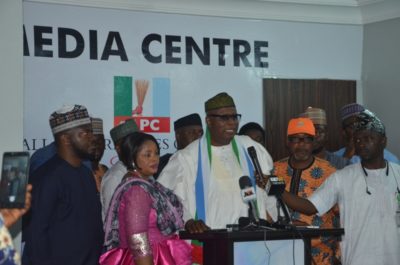 Senator Babafemi Ojudu, one of the APC governorship aspirants

Outgoing Ekiti Commissioner of Police, Mr Abdullahi Chafe, has warned political parties and aspirants not to engage in acts capable of causing violence while conducting their gubernatorial primaries.

Chafe gave the advice at a valedictory news conference on Friday in Ado-Ekiti.

The All Progressives Congress (APC) will hold its gubernatorial primary on Saturday May 5 for the July 14 governorship poll.

The primary will be Chafe’s last major duty in the state because he will retire by 12 midnight on May 5.

He said his successor will also maintain law and order before, during and after the governorship poll.

He disclosed that all the party leaders in the state had not only signed a pact to be of good behaviour, they had also made commitments to control their followers’ emotions.

“All the parties and their aspirants have pledged to be of good conduct and they also agreed to accept the outcome of the results in good fate.

“I believe that as matured men and women who can be trusted, they will want to stand by this solemn promise.

“We in the police do not want anybody, no matter how high or low to bring trouble to Ekiti,” he said.

Chafe, who joined the Nigerian Police Force on Feb. 2,1986, said that he was happy to retire without blemish and urged other officers and men to emulate his track records.

“My message to officers and men is that they should be wary of politicians, especially at a period such as we are in Ekiti.

“From my personal experience about life, it is not how fast you can run to amass wealth that will make you rich but how you are able to systematically go about it will give you the peace you desire in life,” he said.