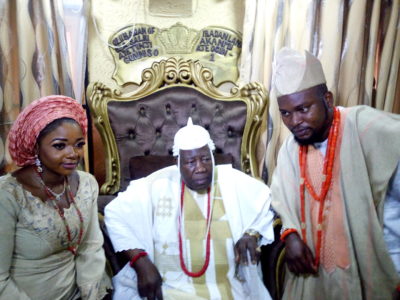 Others installed with him were: Ayuba Adedoja, Mogaji Ogunganganran family Itutaba and Adegbola Nurudeen Adewale as Mogaji Adefisoye Family of Alekuso.

The installation was witnessed by the families and friends of the new mogajis and both the High and low Chiefs in Ibadanland including Chief Rashidi Adewolu Ladoja, the Osi Olubadan, and Iyalode Ibadan, Alhaja Aminat Abiodun.

During the installation, Ladoja noted that traditional titles are meant to promote unity and progress in any community stressing that he had been assisting people who come to him since he became a traditional title holder.

He urged the new mogajis to be committed to the development of Ibadanland.

Ladoja noted that the mogaji position is an exalted position because it marks the beginning of the journey to the Olubadan throne pointing out that as prospective future olubadans, the new mogajis should be good ambassadors of the ancient city.