Senators pass vote of no confidence on IGP

Nigerian senators on Wednesday passed a vote of no confidence on the Inspector-General of Police, Alhaji Ibrahim Idris.

The senators say he is unfit to hold public office.

The senators also noted that the IG’s refusal to appear before them, after several invitations makes him a persistent threat and enemy of the nation’s democracy.

Senate President Bukola Saraki described the IG as a persistent threat and enemy of democracy.

”During the executive session, the Senate deliberated on the non appearance of the IGP to the Senate in plenary after series of invitations.

”Therefore the Senate resolves to declare the IGP as an enemy of democracy and not fit to hold any public office within and outside Nigeria. The leadership of the Senate was also mandated to look into the matter for further necessary action,” Saraki said on the floor of the Senate. 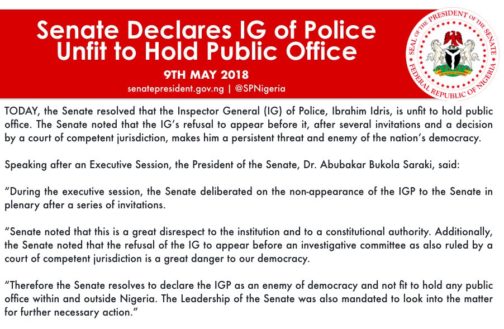 Tags:   The Senate   vote of no confidence