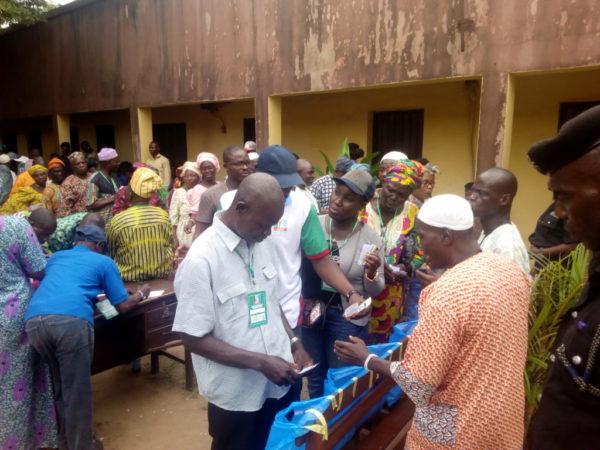 The All Progressives Congress (APC) congress in Ifako-Ijaiye Local Government Area of Lagos State on Saturday ended abruptly as delegates rowdily disagreed on the election of some candidates.

The congress, which started around 1pm, had been peaceful until commotion erupted over the choice of candidates.

Trouble started when the electoral officers announced some names as elected executive members after a voice vote by the delegates.

Some party members opposed to the announced names protested noisily, resulting in a bedlam.

Appeals to party members to maintain the peace by the Chairman of the council, Mr Oloruntoba Oke, were not heeded as supporters of the opposing candidates engaged in a shouting match.

The situation almost degenerated into violence, but for the intervention of security personnel around who prevented members from fighting one another.

The electoral officer, thereafter, had to be whisked away by security officials after attempts to attack them.

Speaking after the incident, the council Chairman said the congress had been orderly before the commotion.

He said the congress was almost concluded when some members noisily disagreed over some candidates.

Toba, however, expressed the optimism that the issue would be resolved amicably by the leadership of the party in the state.

“Disagreements are normal in politics. We will be trusting the leadership of the party to resolve the issue. I have no doubt that everything will be resolved “,he said.

In Agege LG, Mr Jubreel Abdulkareem, a chieftain in the area, faulted the exercise in the council saying no congress was held.

Abdulkareem, the former Executive Chairman of the council told newsmen that some delegates were denied access to the venue.

Abdulkareem said that following the crisis that greeted the ward congress on May 5, an apex leader of the party, Prof. Tunde Samuel, called a peace meeting before the congress where the posts were shared between the two camps.

He said that only delegates from one camp were called to vote, hence there was agitations from the other camp.

He claimed that one person was shot in the imbroglio that followed.

An eyewitness, who preferred anonymity, said that the reading of list of delegates, which favoured one faction, triggered the crisis.

He said there was shooting from inside the venue and a bullet hit a man at the gate of Central Primary School, Oniwaya, Agege, where it held.

Efforts to confirm the shooting and arrests by the police were however unsuccessful, as the Lagos Police spokesman, SP Chike Oti, promised to get back but had yet to do so at the time of filing this report.

However it was a different situation at Ayobo/Ipaja Local Council Development Area as the congress ended peacefully.

The congress which started 10 am at St. Andrews Primary School, ended with delegates electing party executive members by consensus.

There was jubilation by party members, who danced around the venue after a successful congress.

Mr Bisi Yusuf, a member of the state House of Assembly (Alimosho) who was present at the congress commended members for peaceful conduct.

He said he was proud that the exercise ended without rancour or violence.

Yusuf said politics should be about understanding and not violence or desperation.

“I am happy at the conduct. I thank all party members for the success.

“Ipaja /Ayobo has done it again. Everyone is happy with the results.

“You see, politics should not be about desperation or rancour. It should be about understanding.

“We have demonstrated that today and everybody is satisfied “,he said.

He commended the National Leader of the party, Asiwaju Bola Tinubu for laying the foundation for peaceful conduct of the congress.

He said Tinubu’s constant appeals to members to always be peaceful had yielded the desired results in Ayobo/Ipaja.

Yusuf urged members to continue to maintain peace in the area to ensure success of future elections.

In Agbado Oke-Odo LCDA, the exercise started by 11 :30 am, with heavy presence of policemen and oficers of the Nigerian Security and Civil Defence Corps (NSCDC).

Mr Olukayode Aina-Gold, one of the APC State external observers, expressed satisfaction with the peaceful and orderly conduct of the Congres.

“Honestly, I am overwhelmed because initially I was sceptical.

“I didn’t want to come, I thought there might be some rancour and alot of disorganisation but on getting here, I am happy with the conduct and orderliness,” he said.

The 27 Local Government Executive Officers were uncontested and the nominated executives were ratified by the voters from the seven wards of the LCDA.

Arogun said: “Our congress is very peaceful because we carried everybody along including the leaders and the stakeholders in Agbado Oke Odo.

“We always involve them and that is why we have no opposing camps because we are all involved.

“All we did was just ratification because there was no serious opposition as all the leaders had input on the list we put forward for those to be elected into the executive.”

He however, advised party members who were dissatisfied with the outcome of the congresses in the state so far to dialogue with the leaders in order to resolve the matter in a family way.

In Mushin LG, security personnel, such as the Police and Civil Defence were stationed around the venue to avoid social miscreants from disrupting the exercise.

Bamigboye spoke during the congress held at the party secretariat in Mushin.

“The election is very free and well conducted. Our party members are more compassionate in this exercise.

“They have really composed themselves very well to ensure that there is a free and fair election today,” he said.

The chairman said the newly elected chairman for the party in the area won unopposed.

Bamigboye said the future of APC was very bright in the sense that the party would always organise themselves very well.

“We have to move forward and we have to advance ourselves and gone are those days that we are desperate to win,” he said.

Party delegates were screened before being allowed into the venue under the watch of the security agencies.

Mr Odeniyi Odeyemi, a delegate from Ward C said: “We are very happy that the process was peaceful and we thank God that the will of people prevailed without opposition.’’

A member of the Lagos State House of Assembly, Mr Rasheed Makinde, commended the party leaders and members for the spirit of oneness in the area.

According to him, the leadership of APC in Ojokoro LCDA had come together with a single list, which the LOC (Local Organising Committee) read out to everybody and all agreed to it.

“This is a sign that our party is moving forward and it is a good omen for our democracy,’’ Makinde told NAN.

He said the development was a sign of maturity and harmony and the progress of the party.

Mr Thaddius Uwanaka, the Independent National Electoral Commission (INEC) Officer, who monitored the Congress, expressed satisfaction over the conduct of the delegates.

The Congress was held across the local governments in the state.