Somalia kicks off constitutional review process ahead of 2020 elections 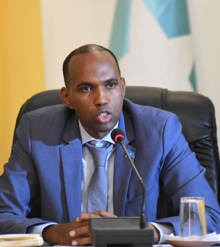 Somalia on Monday kicked off a constitutional review process ahead of “one-person, one-vote” elections scheduled for 2020, an official said.

Prime Minister, Hassan Khaire, who launched the process, pledged financial and political support to the process to ensure the country gets a new Constitution by the end of 2019.

“I hereby confirm that my government has pledged three million dollars for the constitution process to be finalised,” Khaire said, according to a statement issued by AMISOM.

“However, this pledge should produce a Somalia-owned document, Somali thinking, Somali economy, Somali advice and new Somali unity that rebuilds the Somali nation we lost,” he said.

Khaire said there was need to finalise the constitutional process to unify the country, promote economic growth and above all deliver a new document for posterity.

He said Somalia needs a new constitution to accomplish the movement towards one-person one-vote to give the population an opportunity to pick leaders of their choice.

The three-day convention comes as the Horn of Africa nation prepares to move towards one-person, one-vote elections in the 2020 and 2021 in which the National Independent Electoral Commission (NIEC) is working to achieve this.

Analysts say a key step in creating a stable and democratic political system is the registration of political parties, in line with the Political Party Law of the Federal Government of Somalia, which was passed by the Somali Parliament in June 2016.

Francisco Madeira, the Special Representative of the Chairperson of the AU Commission, lauded the efforts of Somali leaders for prioritising the constitutional review process in accordance with Somalia’s Political Roadmap.

“As we implement the transition plan and handover more security responsibilities to you the Somalis, this consultation and the subsequent voicing of your opinions on how you, the Somalis, wish to be governed, is the beginning of Somalia taking charge of its responsibilities,” Madeira said.

He called for a wide consultative engagement, whose outcome should aim at facilitating a fair and inclusive political process in Somalia.

Somalia is currently governed by a Provisional Constitution, adopted on Aug. 1, 2012 which was agreed upon by 825 delegates at the National Constituent Assembly after years of conflict.

The federal and state governments plan to have a new document ready ahead of the one-person one-vote elections scheduled for the 2020.

Abdirahman Jibril, the Minister of Constitutional Affairs, traced the history of the constitution making in Somalia, which began in 2000 in Djibouti and later moved to Kenya, before the eventual adoption of a Provisional Constitution in 2012 through a constituent Assembly.

“The agreement which we signed at the Office of the Prime minister November 2017 made us become one united group without any divisions,” Jibril said of the tripartite agreement signed by the Constitution Review Commission, the Parliamentary Oversight Committee and his ministry.

He said through the tripartite agreement, the Constitution Review Commission is determined to give the people of Somalia a new document as soon as possible so that the next elections in 2020 are held under a new political dispensation.