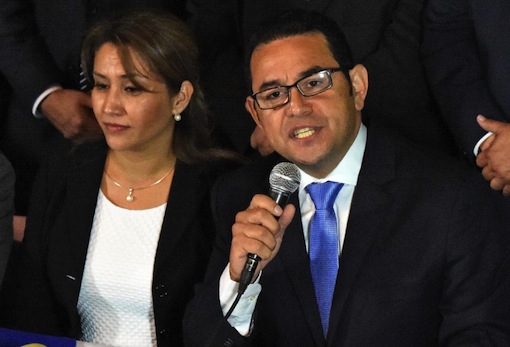 President-elect Jimmy Morales, of the National Front Convergence, delivers a speech next to his wife Hilda Marroquin, after winning the run-off election, in Guatemala City on October 25, 2015 (AFP Photo/Rodrigo Arangua)

Guatemala opened an embassy in Jerusalem on Wednesday, two days after the U.S. made the same move.

Guatemala also followed the U.S. in May 1948 to be the second country to recognise Israel as capital of Jerusalem.

“This is the beginning of something extraordinary,’’ Prime Minister Benjamin Netanyahu said at the dedication of the new embassy on the third floor of a high-rise office building in the Malha Technological Park in Jerusalem.

Netanyahu said that this move goes “hand in hand’’ with opening two days ago of the U.S. embassy in the capital.

The friendship between the U.S., Israel and Guatemala was underlined by President Morales, who arrived to take part in the ceremony.

“70 years ago the U.S. and Guatemala voted in favour of partition,” he said. “Three friends that share friendship and loyalty.”

Netanyahu noted in his remarks that there is a Guatemala Street not far from the new embassy.

“I think we need more Guatemala Streets in Israel,” he said. “And we’d also like to see Israel Streets in Guatemala.”

To that end, he said that his next trip to Latin America will pass through Guatemala. He said he plans to visit the region by the end of the year.

Some 150 people crammed into the foyer of the embassy, including U.S. Ambassador to Israel, David Friedman, Sheldon Adelson, Jerusalem mayor, Nir Barkat and numerous Guatemalan ministers and members of the legislature, attended the event.