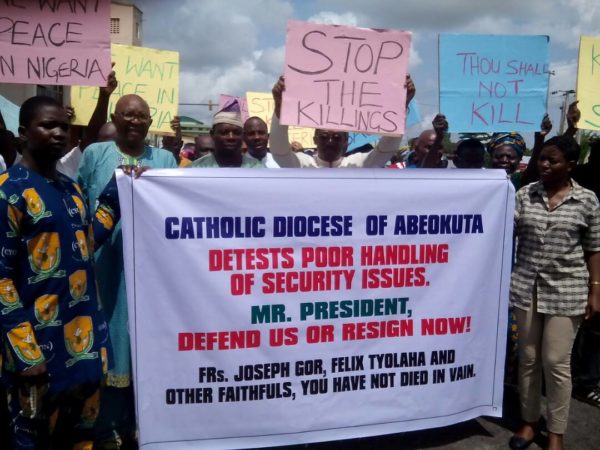 Catholic members in Abeokuta joined their counterparts across the country to hold a mass service and protest for the killing of two Catholic priests and some parishioners by herdsmen in Benue state; and the general insecurity in the country.

The placard-carrying protesters who converged at St. Anne Catholic Church, Ibara, Abeokuta, the Ogun state capital to observe a mass rally around Abeokuta metropolis called on the Federal Government to stop the incessant killings in the country.

The protesters who stormed the streets of Abeokuta with various placards such as: “President Buhari, stop these killings or resign, “Human live is Sacred, “Killing is a sin, “Have we lost our human value, “We want Peace in Nigeria,” among others.

Speaking with Journalists shortly after the protest, the Catholic Bishop of Abeokuta Diocese, Most Rev. Peter Odetoyinbo stated that the protest was organized to commiserate with families of the deceased priests killed during the Benue attack.

Rev. Odetoyinbo also called on President Muhammadu Buhari to put an end to the killings, saying as Chief Security Officer of the country, he must ensure the safety of all Nigerians because our lives and welfare is in God’s and president’s hands.

Rev. Odetoyinbo explained that “we are here to protest the killings and insecurity in the country; more importantly to mourn the killing of two of our priests and 15 parishioners in Makurdi Diocese of Benue State as they are being buried today in solidarity with Catholic faithful all over Nigeria.

“All we are saying with this protest is that the federal government should save us and stop this killings. Human lives is very sacred whether you are a Muslim or Christians, it doesn’t really matter.

“We need peace in the country, the President is our father and the head of the house and should therefore live up to the expectations of ensuring that everybody is safe in the country, this is our message with this peaceful protest”.

Meanwhile, Bishop Kayode Martins during his sermon charged the members to be mindful of what they take as parents and live a responsible live because of their children. They should ensure they take cognisance of what their children do.

He also asked the Federal Government to explain what happened to the money recovered from looters.