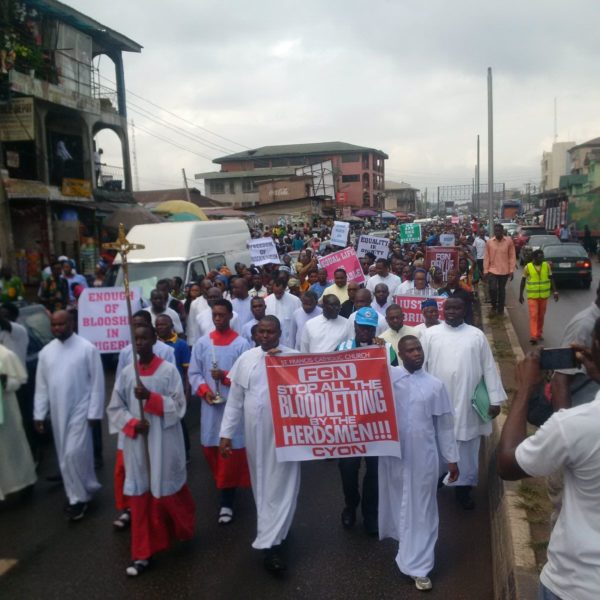 Hundreds of Catholic faithful in Edo State on Tuesday joined their brethren across the country to stage a peaceful protest in solidarity with the victims of attacks by suspected herdsmen in Benue and other states.

The protesters, under different groups, marched through major roads in the Benin metropolis, with many of them carrying placards with various inscriptions. They prayed for an end to the killings, kidnapping and other forms of violence bedevilling the country.

The protest coincided with the burial of two priests, Fr. Joseph Gor and Fr. Felix Tyolaha – and 17 parishioners who were killed by suspected herdsmen during an early morning Mass at St. Ignatius Quasi Parish, Ukpor-Mbalom, Ayar-Mbalom, in the Gwer East Local Government Area of Benue State in April.

They urged President Muhammadu Buhari to ensure justice for all Nigerians by taking urgent steps to rid the country of the spate of attacks by suspected herdsmen in several States.

The Chancellor of the archdiocese, Very Revd. Fr. Michael Oyanoafor, lamented that the level of violence in the country had deteriorated to a level that put the life of every Nigerian at risk.

“We are using the opportunity to say that life is sacred; nobody has the right to take a life. We are, therefore, saying no to killings, kidnapping, cultism and other vices.

“We are also saying no to terrorism. We are saying all these because, in different parts of the world, especially in Nigeria, no one is spared, (whether they are) Catholics, Christians, Muslims or worshippers of the Africa traditional religion.

“Inasmuch as the government is trying to some extent to see what it can do to cushion the situation, we are saying that many people are still dying. It should do more.

“We are telling the government to make every effort to arrest the situation so that the citizens can live in peace. It has the power, in terms of having control of the Nigeria Police and the military in different forms and capacity. We are saying that it should help out,” Oyanoafor said.

Catholic faithful in Abeokuta, Ogun State also joined in the solidarity march to call for an end to killings in the country.