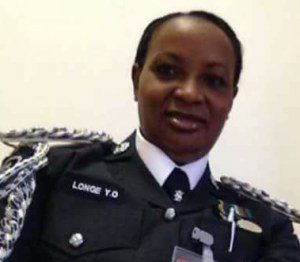 This is the Deputy Commissioner of Police Yetunde Longe, the tough policewoman who is working hard to give the Lagos State Criminal Intelligence Investigation Department (SCIID), Panti, Yaba, a new image.

Since she was appointed four months ago as head of the department, she had ensured that suspects are no longer detained more than necessary and has handled more than 200 criminal cases in four months.

She also ensured that men and officers of the department dress corporately to reflect the serious work being done by the department.

A reliable source at the SCIID said the criminal cases investigated between February and May this year included murder, armed robbery, forgery, fraud and other violent crimes.

The source said that suspects no longer stay in custody unnecessarily as the case used to be.

According to him, the mandate by the Lagos State Commissioner of Police, Mr Edgal Imohimi, is that suspects are charged to court within a stipulated period.

“Court orders are then secured if there is need to keep a suspect further in detention for advice from the Department of Public Prosecution (DPP).

“Since the Deputy Commissioner of Police in charge of SCIID, Mrs Yetunde Longe, took over four months ago; over 200 cases have been effectively handled.

“She does not keep suspects in custody unnecessarily; we charge suspects to court when there is need to, and give bail whenever it is needed.

“Within a maximum of two weeks, the suspects will be charged to court,’’ the source said.

The source said that decongestion of SCIID cells compared to what it used to be in the past should be attributed the timely prosecution of suspects.

He added that the delay in getting autopsy reports for cases to be taken to DPP for advice, often caused delay in prosecution.

“Whenever we have murder cases, the first thing we do is to charge the suspect to court.

“We also get autopsy reports and determine if there is need to arrest more suspects.

“This often causes delay in prosecution,’’ the source, a senior detective added.

The source noted that SCIID was determined to reclaim its past glory, saying that over 10 policemen from the department had been penalised in the last four months, following allegations bordering on indiscipline.

“If you are found wanting, you will be reported to the provost and if you are an officer, you will get a query.

“The SCIID Panti is believed to be the topmost investigation department, but it seems like we are losing that.

“Since the deputy commissioner of police assumed the office, we have been cleaning up the bad reputation and we will continue to enjoy the glory.

“CP Edgal Imohimi was here and he lectured us on his mandate to key into community policing and safety partnership.

“This cannot be done without respecting the people’s right. We have sanitised the cells and created conducive environment for suspects,’’ the source said.

However, he added that officers of the SCIID are also compelled to dress corporately for the good image of the department.