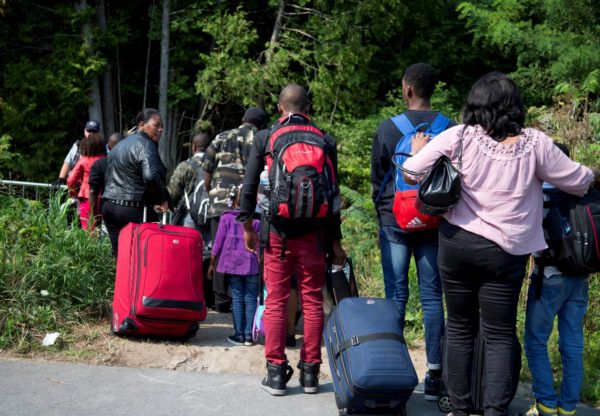 FILE PHOTO: A group that stated they were from Haiti line up to cross the U.S.-Canada border into Hemmingford, Quebec, Canada, from Champlain in New York, U.S., August 21, 2017. REUTERS/Christinne Muschi/File Photo

The UN on Tuesday, called on the U.S. to stop detaining irregular migrant families and separating children at the southern border, saying it contravened the law.

“The U.S. should immediately halt this practice of separating families and stop criminalising what should at most be an administrative offence, that of irregular entry or stay in the U.S.

“Detention should be the last resort. The current U.S. policy is a serious violation of the rights of the child,” UN Human Rights Spokeswoman, Ravina Shamdasani, told a news conference in Geneva.

“It is, therefore, of great concern that in the U.S., migration control appears to have been prioritised over the effective care and protection of migrant children,” Shamdasani added.

She noted that the U.S. was the only country in the world that had not adopted the UN Convention on the Rights of the Child.

Many of them are fleeing violence or human rights violations, according to the spokeswoman.

Most people crossing the U.S. southern border are from Guatemala, Honduras and El Salvador, where rampant violence would give them the right to international protection, UN Refugee Agency Spokesman, William Spindler, said.

Several hundred children and babies have been taken away from their families since October, according to information received by the UN office.

Under international human rights standards, authorities should always act in the best interest of children in any situation.