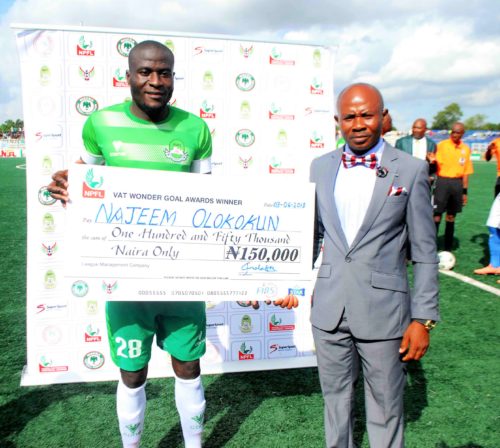 Still basking in the euphoria of his first VAT Wonder Goal Award success, Nasarawa United’s Najeem Olukokun believes there could have been no better time to win the award than during the holy month of Ramadan.

Olukokun edged former winner, Sikiru Alimi of Sunshine Stars to clinch the Match Day 21 award which comes with a cash reward of N150,000. But the player is to nominate a Charity that will receive half of the reward prize.

“To donate to Charity especially in this period of Ramadan is a thing of joy for me and I am so proud that this is happening”, Olukokun told www.npfl.ng in an online chat.

While expressing appreciation to the fans that voted for him, the former Shooting Stars of Ibadan player said the award will motivate him to work harder to improve his goals scoring abilities and help his team win more matches.

“I am very happy to win the award and also very grateful to the fans that voted for me. It will motivate me to work harder and perhaps score more goals to help my club win more matches in the games ahead”.

Olukokun was nominated alongside Alimi, Reuben Bala of Plateau United and Pascal Seka of FC IfeanyiUbah. The Nasarawa United forward clinched the award with 3460 votes, beating Alimi to the second place with a total of 1244. Bala, had a total of 138 votes while Seka secured 110 votes.

Olukokun also had words of praise for his team mates saying, “I want to say a big thank you to my team mates. Without them, I couldn’t have achieved this because a tree cannot make a forest.”

He has since nominated Hajiya Maimuna Katsai Motherless Home as the charity to receive his donation. The VAT Wonder Goal Award is an initiative of the League Management Company (LMC) supported by the Federal Inland Revenue Services (FIRS).