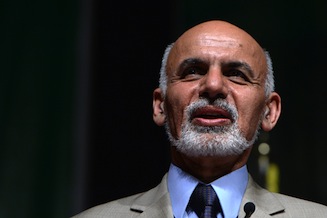 Afghan President Ashraf Ghani announced a ceasefire with Taliban insurgents on Thursday until June 20, coinciding with the end of the Islamic fasting season, but said fighting against other militant groups such as Islamic State will continue.

He made the announcement in a televised address.

“This ceasefire is an opportunity for Taliban to introspect (sic) that their violent campaign is not winning them hearts and minds but further alienating,” he said in a Tweet.

“With the ceasefire announcement we epitomise the strength of the Afghan government and the will of the people for a peaceful resolution to the Afghan conflict.”

The Taliban are seeking to reimpose strict Islamic law after their ouster in 2001 at the hands of U.S.-led troops.

From 1996 to 2001, the Taliban held power over roughly three quarters of Afghanistan, and enforced there a strict interpretation of Sharia, or Islamic law.

The Taliban emerged in 1994 as one of the prominent factions in the Afghan Civil War and largely consisted of students (talib) from the Pashtun areas of eastern and southern Afghanistan who had been educated in traditional Islamic schools, and fought during the Soviet–Afghan War.

Under the leadership of Mohammed Omar, the movement spread throughout most of Afghanistan, sequestering power from the Mujahideen warlords.

The Islamic Emirate of Afghanistan was established in 1996 and the Afghan capital was transferred to Kandahar.

It held control of most of the country until being overthrown after the American-led invasion of Afghanistan in December 2001 following the Sept. 11 attacks.

At its peak, formal diplomatic recognition of the Taliban’s government was acknowledged by only three nations: Pakistan, Saudi Arabia, and the United Arab Emirates.

The group later regrouped as an insurgency movement to fight the American-backed Karzai administration and the NATO-led International Security Assistance Force (ISAF) in the War in Afghanistan.

The Taliban have been condemned internationally for the harsh enforcement of their interpretation of Islamic Sharia law, which has resulted in the brutal treatment of many Afghans, especially women.

During their rule from 1996 to 2001, the Taliban and their allies committed massacres against Afghan civilians, denied UN food supplies to 160,000 starving civilians and conducted a policy of scorched earth, burning vast areas of fertile land and destroying tens of thousands of homes.