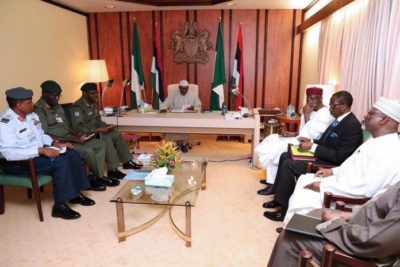 President Muhammadu Buhari on Thursday summoned service chiefs and heads of security agencies for the third time in the week at the presidential villa, Abuja.

The President had on Monday met behind closed doors with the service chiefs and selected heads of security agencies at the Presidential Villa, Abuja.

Buhari also on June 6 summoned an expanded meeting of the Security Council where he was briefed by the Minister of Defence, Mansur Dan-Ali and the service chiefs.

The National Security Adviser to the President, Retired Maj-Gen. Babagana Munguno and the Inspector-General of Police, Ibrahim Idris, also attended the meeting.

However, Thursday’s meeting between the President, security chiefs and heads of security agencies lasted for less than 30 minutes.

The minister of defence, who briefly spoke to State House correspondents, said the meeting reviewed issues deliberated upon at their last meeting.

He said “we came to review what we did at the last meeting.”