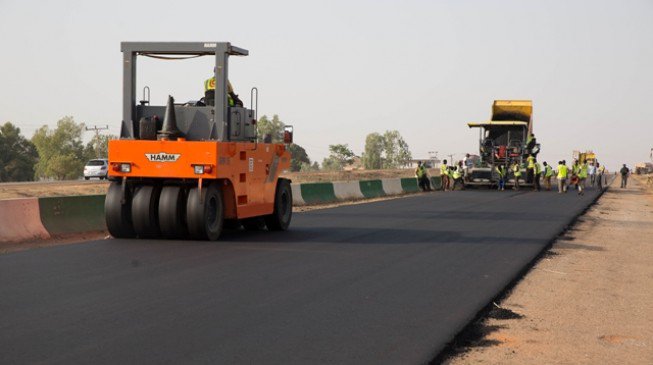 The Minister of Transportation, Rotimi Amaechi has said that N100billion would be needed by the contractors to complete the dualisation of the East-West road.

Amaechi, together with the Minister of Niger Delta Affairs,Pastor Usani Uguru Usani, said this during the inspection tour of the Dualisation of the East-West road, which started from Warri to Eleme junction.

According to him, political opponents are complaining that All Progressives Congress (APC) administration has abandoned the project which is not true.

He said that the road from Warri to Port Harcourt has been worked upon, saying that some sections had one lane completed while some areas had both lanes completed.

“I thank the cabinet and President for asking us to come, the reason I said that is because my initial knowledge was based on what our opponents were saying that the road was abandoned.

“We drove all the way from Warri without encountering any bad road; in some areas one lane was completed, and the two lanes completed in other areas

“We drove from Warri to Port Harcourt without any potholes.

“Those areas that the second lane have not been completed; the contractor said that if they get N57billion they will complete the project.

“The other contractor said he needs N43 billion, so, we still need about N100 billion to complete the project except from Onne to Oron, which is still negotiable,” he said.

He, however, said that the road from Onne to Eket has been completed except for the collapsing bridge, adding that from Warri to Patani only one lane was left to be completed.

Amaechi said that the second lane, from Patani-Ahoada-Eleme is being completed, all the way to Port Harcourt.

Also, speaking, the Minister of Niger Delta Affairs, Pastor Usani said that the project started in 2006.

He said that this administration has made tremendous progress than the previous administration, attributing the delay of the project to lack of fund.

“Basically, lack of fund has been responsible for the delay in the delivery of the project.

“The contractors need fund to continue and be permanently on site to execute the job and complete it.

“For the areas that are not completed, we expect that when contractors return to site, they would work on the growing grasses along the road, but for the sections that we have taken over, it is a matter of maintenance which is our responsibility.

“The FEC gives priority to this project and this is the reason this ministerial committee was established to come and do the assessment, so we will report back.

“The government is willing to source for funds to complete this project,” he said.

Dr Ray Chaudhuri, Ag. Managing Director of Setraco Nigeria Limited, said the contract was awarded to the company in 2009 to handle section one and two, saying that section one has been completed.

The inspection of the Dualisation of the East-West road commenced from Warri, Delta State to Eleme junction, Eket in Rivers.

The Dualisation of East-West road from Warri to Port Harcourt is being handled by Setraco Nigeria Limited, while Reynolds Construction Company (RCC) is handling the section three of the project, from Eket to Akwa-Ibom state.