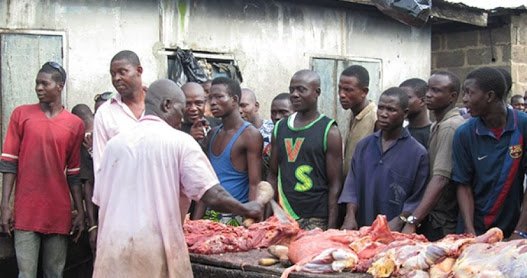 The Oyo State Government has ordered recalcitrant butchers in the state to relocate to the new Ibadan Central Abattoir not later than Monday.

Alhaji Abidemi Siyanbade, the Special Adviser to Gov. Abiola Ajimobi on Community Relations, gave the ultimatum in Ibadan on Friday.

Some butchers have refused to relocate to the new Central Abattoir which officially commenced operation on Monday.

The new abattoir is located at Amosun village in Akinyele Local Government Area of the state.

Siyanbade stated that government directive was not intended to humiliate any butcher in the city but to enhance the quality of meat produced for human consumption.

“We have visited other states and have seen what operates. Today, every government is doing all within its means to protect citizens from health and environmental epidemic.

“Our state is poised to achieve maximum protection for the citizenry, hence the governor’s directive that all necessary measures must be put in place.

“Among such measures is the relocation of our butchers in the city to the fully equipped central abattoir for proper supervision by professionals,” he said.

He stated that government has provided banking and security facilities at the abattoir, assuring them of better patronage.

Oladeji, who spoke on behalf of the 25 local governments and LCDAs in Ibadan, said adequate facilities have been provided at the new abattoir for the benefit of butchers.

He stated that government had also provided transportation for commuting between the new abattoir and Ibadan metropolis.

Two of the butchers, Mr Akeem Olayiwola and Mr Adebayo Aleshinloye, had earlier told the government representatives that they were not comfortable with the relocation.

They had also expressed worry on security, transportation and patronage at the new location.