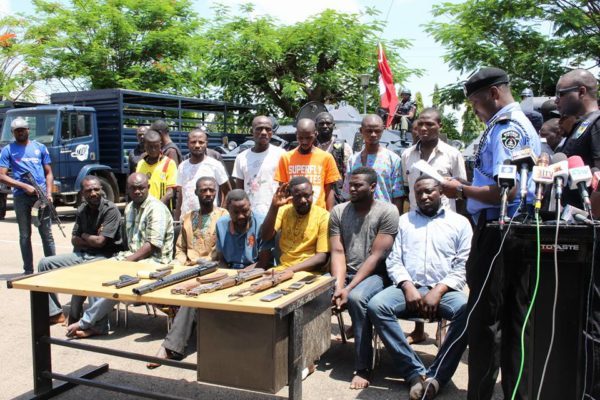 A youth group, the Concern Kwara Youth Movement has called on the Nigeria Police Force not to politicise the April 5, Offa robbery case.

A statement signed by the coordinator of the group Mr Salahudeen Lukman in Abuja on Friday called for a proper investigation into allegations made against Senate President Dr Bukola Saraki.

Lukman said the group sympathised with the victims of the ugly incident and commended the State Government and the Nigeria Police Force for their swift response in reinforcing security in the area.

“Silence in the face of injustice is sin against humanity; hence the leadership of this group has deemed it necessary to make its position known on the investigation of the case.

“The Nigeria Police Force is greatly commended for the rapid action in apprehending the suspects, but we are also calling on the police to ignore any form of tricks to politicise the case.

“We condemn in strong term the attempt to use the souls of 33 people including a pregnant woman and nine police officers to play politics on the altar of political vendetta.

“We demand that the suspects be treated as armed robbers and not political thugs since they were all arrested in connection to robbery and not as political thugs,’’ he said.

Lukman urged the police not to give the incident a political name yet, but face the investigation with all honesty to clear the suspicion of the people.

“It is obvious that the mention of Saraki as their political godfather is an attempt to draw political colouration to escape or extend the judgment.

“We urge the police not fall for the trick but immediately investigate to get the real culprits and prosecute them,’’ he said.

Lukman said that the mention of the Senate President in the case was nothing but a deliberate attempt to ridicule and tarnish his image and asked that the issue be handled with caution to avoid unintended damage to his personality.