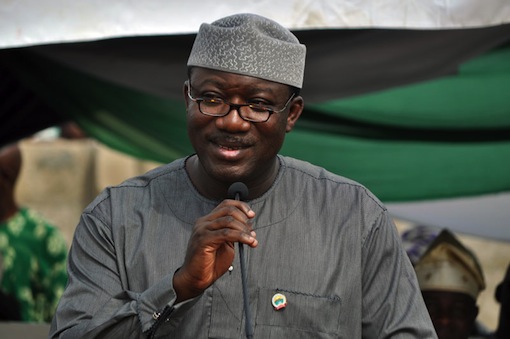 Dr. Kayode Fayemi, the candidate of the All Progressives Congress (APC) in the July 14 governorship election in Ekiti, on Sunday appointed Mr Opeyemi Bamidele as the Director-General of his campaign office.

Fayemi‎ made the declaration at the inauguration of his mobilisation and campaign committees in Ado-Ekiti.

Fayemi said the former lawmaker, who was recently shot at the APC secretariat in Ado-Ekiti during a rally, was recovering fast and would assist him during his electioneering campaign.

He also debunked reports published in some newspapers that the former lawmaker had been flown to the United Kingdom for treatment.

”By the special grace of God, I have appointed‎ my good friend, Mr Bamidele Opeyemi, as the Director General of my campaign.

“I equally also want to thank God for sparing his life. I was with him till 1.am this morning and he is recovering well and he can also sit and discuss with me.

”I wish to inform all journalists in Ekiti that my friend, Mr Bamidele Opeyemi, is in good condition, he is still in Nigeria contrary to the stories that was published in some of the newspapers that he has travelled abroad.

”He is healthy and ready to work with me to ensure that our party wins the July 14 gubernatorial election in Ekiti,” he said.

The APC candidate also assured party members and journalists that the ugly incident which occurred during the flag off of the campaign on June 1 would not repeat itself.

He said the security agencies had assured him that the lives of the supporters, party members and journalists would be secured during his campaign rallies which would commence fully this week.

The former Minister of Mine and Steel Development also thanked other APC aspirants who donated vehicles and customised T-shirt‎s and caps to support his campaign.

A total of 11 committees made up of 87 party members were inaugurated by Fayemi.

While congratulating the members, Fayemi charged them to discharge their duties effectively to ensure that he wins the gubernatorial election.

He assured them that all the necessary financial support would be given to the various committees to enable them reach out to the people across the nooks and crannies of the state.