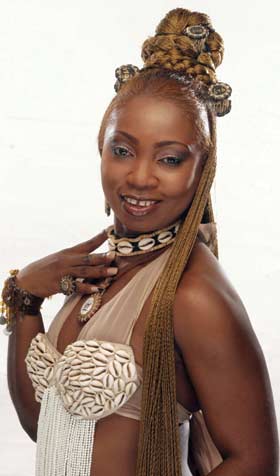 Aralola Olumuyiwa, the talking drummer,“Gangan’’, on Monday said that she was planning to have a musical collaboration with the late Ras Kimono before his death.

She disclosed that the `colabo’ would have included Majek Fashek and other reggae musicians.

Aralola, popularly called Ara on stage, said this while expressing her shock over the death of the Reggae Rastaman.

“I was still planning a collaboration with Ras Kimono, Majek Fashek and other reggae musicians.

“When I discussed it with him, he told me to wait for him to return from his trip to the United States of America but he never went.

“His death hits me badly because he was such a humble and kind hearted fellow. May his soul rest in perfect peace,” she said

.Ara added that the repercussion of procrastination had now dawned on her as she would not be able to perform alongside Ras Kimono in the `collabo’.

She said that this was because the Reggae musician had bid the world farewell unannounced.

“I am completely down and surprised because I saw him last week looking healthy only to wake up from my siesta yesterday to hear of his death.

“My condolences to the family and pray that God fills that huge gap his death had created for them and for us in the music industry, ’’ she said.

Ukeleke Elumelu, popularly known as Ras Kimono, 60, died on Sunday in Lagos after a brief illness.