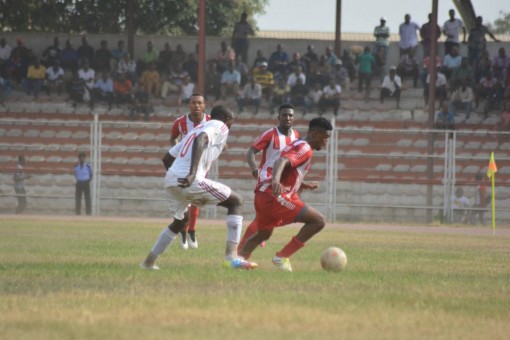 Football action from the NPFL match between Heartland FC and Abia Warriors on Sunday.

The Technical Advisers of Kwara United FC of Ilorin, Abubakar Bala, and his FC Ifeanyi Ubah counterpart, Ladan Bosso, on Monday said players in the Nigeria Professional Football League (NPFL) are good enough to play for the Super Eagles at the World Cup.

Both coaches, in separate interviews with the News Agency of Nigeria (NAN) in Ilorin, said there are enough quality players in the league to fortify the Super Eagles better than it is today.

Bala, who described himself as a youth coach, said NPFL players possess enough zeal and energy to win games for the national team.

“I am the Number One architect of giving NPFL players a chance in the Super Eagles ; as a local and youth coach, I always like to develop the young ones.

“In them, you can have the best, the win and the will to succeed at any level.

“I don’t subscribe to the idea that says Nigeria Premier League teams don’t have good players to play for the national team, “Bala said.

The former Niger Tornadoes of Minna coach also said he was not putting too much hope on the Super Eagles at Russia 2018, although he posited a 50-50 chance to succeed.

“They have done well so far, they have played so many friendlies and I am sure they will do their best, “Bala said.

He explained that for the team to do well in Russia, all stakeholders must work together with the Technical Department of the Nigeria Football Federation.

The former El-Kanemi Warriors of Maiduguri tactician said the results in the friendly games were a blessing in disguise.

He recalled that in 1996, the Olympics team lost its last friendly match at home and went on to conquer the world at Atlanta 96.

Bosso also made a case for the NPFL players, saying the best match any of the national teams had played in recent years was that of Super Eagles Team B with Atletico Madrid in Uyo last month.

“If the coach had not submitted his 30-man list before the friendly, many of the players would have made it.

“The home-based players are just unlucky, they can actually make an impact, ” Bosso said.

The Super Eagles will open its Russia 2018 account against Croatia on Saturday at Kaliningrad Stadium, an edifice with a 35,212-seat capacity opened on May 12

They had lost back to back to England 1-2 in May and 0-1 to Czech Republic in June while the team drew 1-1 with Congo DR in Port Harcourt and lost to Serbia earlier.