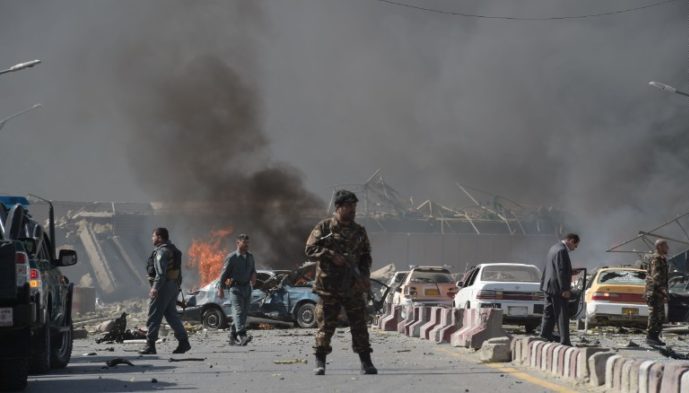 A suicide bomber killed 13 people including women during rush hour on Monday at the entrance to Afghanistan’s rural rehabilitation and development ministry in Kabul as workers were leaving for home, government spokesmen said.

The spikes man said 25 others were injured in the attack.

The attack comes as security has deteriorated in the city during recent months ahead of elections scheduled for October.

“Woman, children and employees of the (rehabilitation) ministry are among the victims,” Najib Danish, spokesman for the interior ministry, told Reuters, referring to the dead and wounded.

Wahid Majroh, spokesman for the ministry of public health, said no children were among the dead.

Fraidoon Azhand, spokesman for the ministry that came under attack, said the suicide bomber detonated his explosives at the gate.

“We don’t know whether all of the victims are employees of the ministry or other civilians as well,” he told Reuters.

“The ministry has a kindergarten where the employees bring their children. Casualties among those children is possible but for the moment we don’t know exactly,” he said.

Islamic State has claimed responsibility for many attacks in Kabul but security officials say several are much more likely to be the work of the Haqqani network, a group affiliated with the Taliban.

Afghan Taliban militants on Saturday announced a surprise three-day ceasefire over the Muslim Eid holiday at the end of this week, ending the fasting month of Ramadan, their first offer of its kind, days after the government declared an unconditional ceasefire of its own against the Taliban.

It was not clear exactly when the Taliban ceasefire would begin, as Eid starts when the moon is first sighted, but it will be Thursday or Friday.

The government ceasefire runs until June 20.

A week ago, a motorcycle suicide bomber killed 14 people near a gathering of Muslim clerics in the Afghan capital after they had issued a fatwa against suicide bombings, officials said, in the latest in a series of attacks to hit Kabul.

In April, two explosions in Kabul killed at least 26 people, including nine journalists who had arrived to report on an initial blast and were targeted by a suicide bomber.

A week earlier, 60 people were killed and more than 100 wounded when a suicide bomber blew himself up outside a voter registration center in the city.