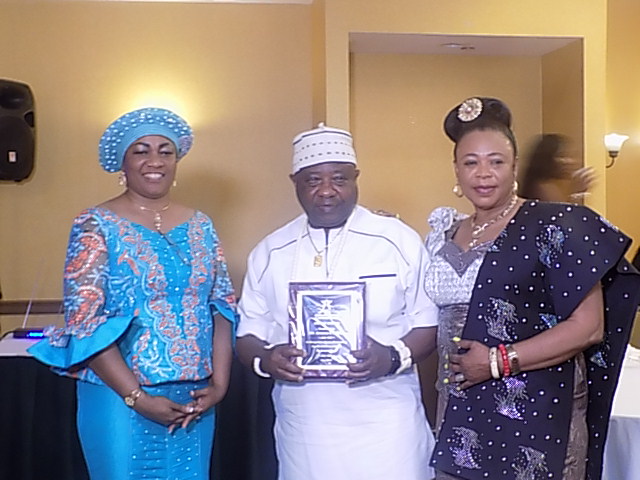 L-R: President, Handover Heals Foundation, Ms Ukay Chima-Jorji and Dr Iwuozo Obilo, a U.S.-based Nigerian philanthropist who won the Impact Award at the Foundation’s Award Night at New Jersey, for his contributions to the Nigerian community in the U.S. With them is Mrs Obilo

A U.S.-based Nigerian foundation, Handover Heals Foundation, said it planned to establish state-of-the-art dialysis centres in Anambra and other states in Nigeria.

President and Chief Executive Officer of the foundation, Ms Ukay Chima-Jorji, said at the foundation’s 2018 Award and Gala Night in New Jersey, that chronic kidney disease was assuming frightening epidemic proportions in Nigeria.

According to the Nigerian Association of Nephrology, advanced kidney failure accounts for about 10 per cent of all medical admissions in Nigeria.

Similarly, small scale community studies have shown that the prevalence of kidney failure ranges from 12 to 30 per cent in the adult population.

Chima-Jorji said that the rising incidences and the deplorable state of renal care had not received the required attention and was not considered a priority area covered by the healthcare policy.

She said it was troubling that majority of the chronic kidney disease patients were young people between the ages of 25 and 40 years – the most productive years of their lives.

The Nigerian, who was a recipient of former U.S. President Barack Obama’s Volunteer Service Award in 2012, said: “Kidney transplantation is the gold standard in the treatment of End-Stage Kidney Disease.

“But in the absence of health insurance plans with wide coverage, less than one per cent of affected patients in Nigeria are able to afford it.

“Unlike in many developed countries where either government or insurance companies are largely responsible for funding renal care, the cost is wholly borne by individuals in Nigeria.

“Dialysis consumables are very expensive and beyond the reach of most Nigerians.

“In the absence of intervention, mortality from terminal kidney failure is almost 100 per cent within three month of diagnosis.”

According to her, the vast majority of patients, who start haemodialysis in Nigeria, stop treatment and die within the first three months of commencement because of financial constraints.

She expressed regret that while less than one in 50 people in Nigeria, who needed dialysis actually received it due to lack of facilities and resources, those with the means embarked on medical trips abroad.

“Our presence here today is a testament to our shared commitment to improving the lives of the poor and vulnerable in the society, who suffer silently, unheard and unseen by the rest of the society.

“We believe we can synergistically align our organisational strengths with you all to expand our philanthropic reach in combating this deadly disease that is engulfing our country.”

According to her, the immediate goal is to provide support services to poor and underprivileged patients of the haemodialysis centres in about 50 health clinics and hospitals in about 10 different states

She said between the next six months to one year, the foundation aims to provide drugs and consumables to poor and needy patients thereby reducing the incidence of early mortality of the patients in end-stage kidney disease.

Chima-Jorji said the foundation would collaborate with state governments and other organisations and individuals to establish high quality dialysis centres in order to better serve the underprivileged groups.

Member, U.S. House of Representatives, Christopher Smith, in his message, commended Chima-Jorji for promoting awareness of renal disease and the proposed dialysis centre in Anambra to serve as a pilot for dialysis and quick intervention for kidney disease.

Smith, who is House Chairman of House Subcommittee on Africa and Global Health, pledged support for the foundation adding, the project could become a model to be replicated beyond Nigeria.

Another member of Congress, Sheila Lee, commended Chima-Jorji for making a difference in the lives of people with disabilities, the disadvantaged, women, children and the elderly.

Dr Iwuzo Obilo, a U.S.-based philanthropic Nigerian medical doctor, was presented with Impact Award for his impacts on the Nigerian community in the U.S. while Pastor Adeniyi Aina bagged the Less Privileged Award.