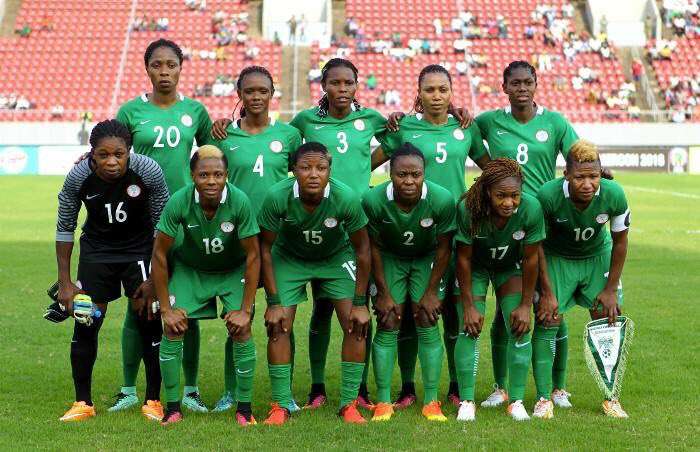 The Super Falcons of Nigeria on Monday qualified for the African Women’s Cup of Nations (AWCON), tagged “Ghana 2018’’ after they thrashed the Scorpions of Gambia 6-0.

The second leg of the Ghana 2018 played at the Agege Stadium saw the AWCON defending champions, Super Falcons, qualify on a 7-0 aggregate.

The quartet from the Falcons’ goal machine, Desire Oparanozie, and a brace from African Women Footballer of the Year, Asisat Oshoala, gave the Falcons the much-needed victory.

Oparanozie opened the floodgates of goals in the 2nd minute from a well-taken penalty and also went on to score in the 49th, 63rd, and 85th minutes.

To complete the rout, Oshoala found the net in the 44th and 74th minutes.

The Coach, Thomas Dernneby, said the victory was important to the team, adding that the team’s rebuilding process would be of his paramount interest.

“This is a victory we cannot wish away, it is important to me and the team and also part of the rebuilding process of the team.

“Beyond the qualification, we also want to be at our best going to the World Cup,’’ he said.

The Man of Match, Oparanozie, said she was happy with the outcome of the match, adding that it was her desire to always put in her best for the team.

“It is the desire of every player to score during matches and I am very happy that I got the needed goals. I always want to put in my best,’’ she said.

For Oshoala, the team will like to retain the Cup they won two years ago.

“We are happy to have qualified, but more than that, we want to defend our Cup in Ghana,’’ she said.

The Super Falcons, 10 times champions of AWCON, qualified for the tournament for the 12th time in a row since the competition started in 1991.

The team, however, came third in the 2008 edition and also came fourth in 2012, their worst standing in the competition so far.

The team will aim at defending the Cup successfully in Ghana later in the year.