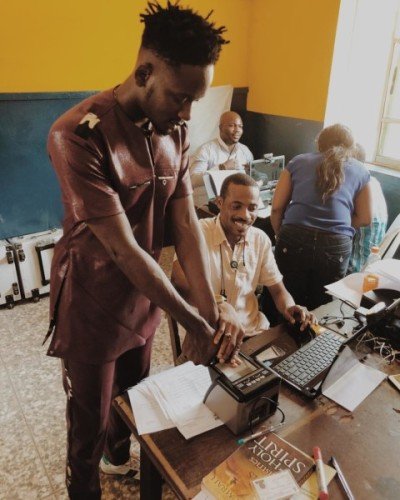 The “Leg Over” crooner made the announcement on his Instagram page, displaying his picture in a PVC registration centre in Lagos on Tuesday.

He stated: I have registered, and I encourage my fans to do likewise.

“Have you gotten yours, please do so and decide the future of your country.”

Mr Eazi stated further that his humanitarian initiative Eazi Foundation was set to empower upcoming artistes in Africa with 100,000 U.S. dollars, and the criteria to be a beneficiary was a proof of registration as an eligible voter.

The singer and songwriter is the pioneer of Banku Music, a fusion sound he describes as the mixture of “Ghanaian bounces, Ghanaian highlife, Nigerian chord progressions, and Nigerian patterns.”

Mr Eazi released his debut mixtape, “About to Blow”” in July 2013, and gained an international audience following the release of the 2015 single “Skin Tight”.

In March 2018, Mr Eazi signed a record deal with Diplo’s label, and then a licensing deal with Universal Africa, a subsidiary of Universal Music Group.

In 2016, he won the Best New Artiste at the Soundcity MVP Awards and the Next Rated Award of the Headies, was also nominated for Best Africa Act of the MOBO Awards.