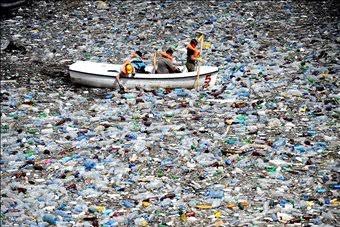 Plastic debris in the sea

Mr Temitope Musowo, the President of the organisation, gave the advice via a statement in Lagos.

Musowo, who is an environmentalist, underscored the need to regulate the generation of plastic waste in the state, saying that this would be a panacea to the growing menace of plastic pollution and its consequences on the environment.

“The increasing rate of plastic waste is harming our environment and the government of Gov. Ambode must rise up to the challenge by regulating and checkmating this in the interest of all.

“On our part, we have been visiting shopping malls and distributing flyers to everyone to sensitise the residents to the dangers of plastic pollution.

“The harm which plastic pollution is doing to our environment and marine life is huge. If I had my way, I would have pushed for the outright prohibition of plastics use in Lagos State, particularly single-use plastics,’’ he said.

He said that his organisation, in line with the theme of 2018 World Environment Day — “Beat Plastic Pollution’’ — had taken the campaign to reduce plastic waste to shopping malls across the state.

Musowo said that for instance, members of the organisation in branded T-shirts staged the campaign at Ikeja Shopping Mall to sensitise consumers to the need to reduce plastic waste.

“This is because findings have shown that plastics constitute 10 per cent of the waste which people generate,’’ he said.

Musowo said that his organisation had on June 5, joined the Lagos State Environmental Protection Agency (LASEPA) to celebrate the World Environment Day.

He said that the overall aim of the initiative was to create appreciable public awareness on the 17 Sustainable Development Goals (SDGs) and the various roles which the people were expected to play in efforts to actualise the goals.

He said that the organisation had been mobilising stakeholders to recognise that the protection of the environment should be an everyday affair which should involve everyone — the government and the people.

Musowo particularly bemoaned the multiplicity of single-use plastics which, he said, constituted over 50 per cent of the plastic waste generated daily.

He said that Lagos State had been facing the challenge of perennial flooding because of the huge plastic waste dumped in neighbourhood drainage systems.

He said that the development had also provided a breeding place for mosquitoes, thereby raising the risk of malaria infection and other ailments.

“Every year, the world uses 500 billion plastic bags and about 13 million tonnes of plastic waste leak into the ocean.

“Every year, 17 million barrels of crude oil are used to produce plastic materials such as plastic bottles; if we continue like this, by year 2050, there will be more plastics than fish in the world’s oceans,” he said.

Musowo urged all the citizens to participate in efforts to address the growing menace of plastic pollution “by refusing what they could not re-use and switching from the use of single-use plastics to the use biodegradable products’’.

He, however, underscored the need to put in place an improved waste collection system that would facilitate waste sorting, waste recycling and reprocessing, while making environmental-friendly choices.

The United Nations has since 1974 set aside June 5 every year as the World Environment Day in order to promote global awareness and action on the protection of the environment.