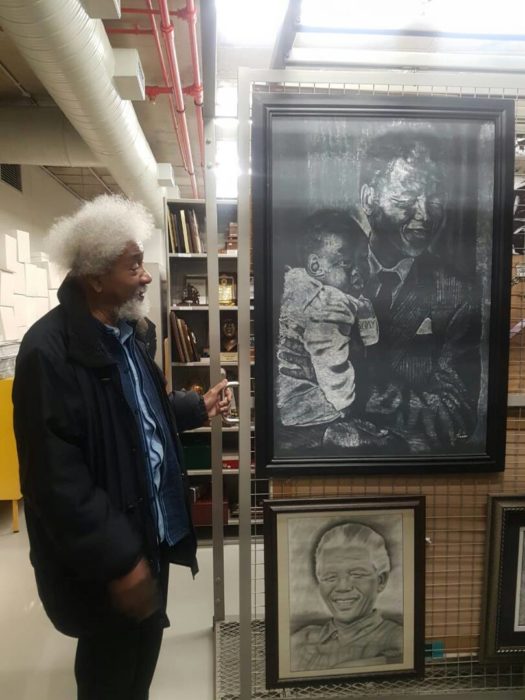 It’s still a good feeling to have, even when you have been fortunate to see enough and exposed to privileges and historical encounters particularly of the arts and art- from a White House select audience for the Broadway and Tony Award musical- The Lion King to small discussion with the now leader of the Commonwealth on nuances of Jazz and High-life music at the Windsor Castle.

This tour of the Nelson Mandela Centre of Memory was different in its reverential experience- a passage through sacred art, and of history that defined the last quarter of the century with ripples of morality into the current.

Of course, it is the centenary year of his birth and the Centre has been transformed with photography (to run for a year) of the epic story from what I had previously seen on a first visit.

Pinkie Mekgwe, an establishment figure now Senior Regional Advisor at International IDEA for Africa and West Asia, had arranged with the CEO of the Nelson Mandela Foundation, Sello Hatang that at least this planned VIP tour- for the Nobel laureate, Wole Soyinka be mid-day; before he delivers his second in the series– A Long Walk to Mandeland at the University of Johannesburg campus in Soweto. All three of us have visited the Centre previously but the difference was in the level of exposure this time. Each also remembered where in this modest Foundation space they were on first visit. Soyinka’s of the frail Mandela ushering him to a corner sofa as they engaged in humorous pep talk. It was a visit with two Harvard University professors- Henry Louis Gates Jr. and Cornel West.

With Mandela gone, it’s the spirit and the art that inhabit the space- the simplicity of the curatorship and of the architecture that contrasts sharply with the mighty one in Abeokuta, the capital of Ogun State in Southwest Nigeria (of the same intended purpose) but of another leader. This Abeokuta edifice is perhaps bigger than the builder’s accomplishments and more so,kindred ones in the United States where the tradition started with presidential libraries and memories of their stewardships. We all laughed when I drew this comparison of simplicity and complexity of taste.

But we moved on with the tour as Razia Saleh (Indian looking) senior archivist was determined to show us more than the usual photography of the struggle. Not only have new offices been created for few fellows but as a policy, the Foundation does not encourage regular tours or public show of its prized collections. Razia explained whilst we stood listening at the most spiritually inhabited of the spaces- Mandela’s office with almost every item intact in his living time.

My presence of mind was swift-flying on the Ghanaian novelist, Ayi Kwei Armah as we walked on,and his critical review of the compiler of Conversations with Myself, Mandela’s last book. The very friendly Director of Research and Archives, Verne Harris had compiled this book and Armah’s review argument was that it’s the same white people or non-Africans who have made themselves the custodians of Mandela’s legacy and thought it hypocritical. Whilst some of Mandela’s closest intellectual friends were white, perhaps Armah’s review imputing this may still be the lingering anger of Apartheid or disregard of the ANC leadership as a coalition of a rainbow alliance.

Razia in walking-talking mood,then took us to the Centre’s downstairs into the Cabinets of Wonder- storage spaces- where many of the Mandela papers have been meticulously filed. Hand written, of course, letters from Robben Island prison to family- Winnie and children and their responses (struggled to him). Some are of tear-breaking read including one in 1969 in which he asked the Apartheid Administration to at least permit him to attend the funeral of his eldest son. They refused.

Among the precious collection are the medallion of his joint Nobel Prize (with predecessor Apartheid President, F.W. de Klerk) and the certificate and mundane items such as a brand label of a favourite prison beverage drink. These preservation have been done with all the security consciousness that the huge lock to the room can muster. The ANC have had a terrible experience with these matters. Its former leader and the Nobel Prize laureate for Peace- Albert Luthuli’s medallion is still missing and Archbishop Desmond Tutu’s at one point but later recovered.

Memory of the past, whatever shadows it casts on still waters is in the bountiful year of our tour -2018. It’s the centenary of Mandela’s birth we know, death of Winnie Mandela and alas, Cyril Ramaphosa becoming President of South Africa. An accidental protégée of Mandela, Ramaphosa refused to attend his inauguration as the first post-Apartheid president after working so hard as one of the architects of the interim constitution and later, what became South Africa’s Constitution. He was also part of the same group- the Executive Transition that designed the flag; a man who in essence then, associates with the creation of the sovereign symbols of the new South Africa.

Ramaphosa would also refuse the Minister of Foreign Affairs Portfolio from Mandela but was warned by him against turning down the constitution-making body leadership. All had to do according to two of Ramaphosa’s biographers, the British academic,Anthony Butler then a Fellow of Emmanuel College at Cambridge University and the South African celebrated writer and journalist-Ray Hartley (author of The Man Who Will Be King) with who should become deputy to Mandela the patriarch. Within the ANC, Ramaphosa was considered too young – by ten years to the eventual deputy- Thabo Mbeki (in the course of time an essential writer of some of Mandela’s important speeches).

A skillful negotiator with a sense of the historical, Ramaphosa had ensured from the very beginning when the world saw him ushering Mandela and Winnie from the prison gates that, he would politically stick with her to the end.Behind that golden touch and seeming unambitious face, lies his interest in public service and politics more than the billionaire he became. And with the trophy at hand, “will he” or “will he not,”make the figurative score as in political satire adaptation or even elements thereof as in,The Lion and the Jewel?Time may give its verdict!!

Soyinka would conclude his A Long Walk to Mandeland lecture series after all, at the famous township of Soweto. “Societies in transition cannot bear bad news, it needs affirmation” he says. The title presupposes a journey but “how do we know when we have arrived there- at that magic destination- we check the sign-post and make a choice.” Mandela “himself never made that name or entertained sainthood, a Utopia- he was pragmatic!”