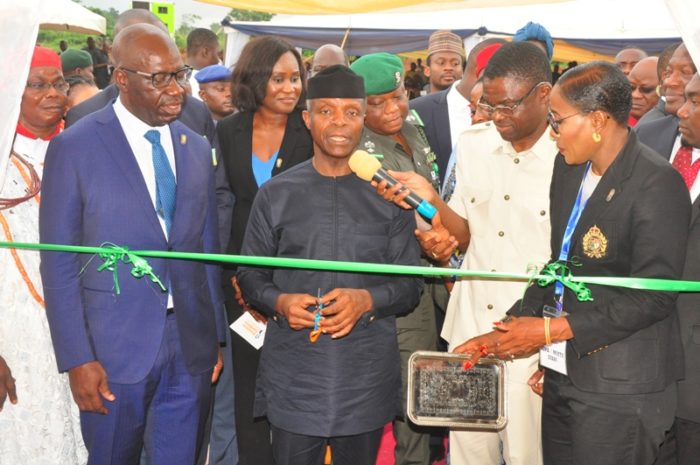 Osinbajo flagging off the construction

The Vice President, while performing the flagging off ceremony, commended the state Governor, Mr. Goodwin Obaseki, for his various initiatives since he assumed office as the governor of the state.

He added that with the pace of work done at the site, there is possibility that the housing units will be completed in no distant time.

“I want to appreciate what the astute and dynamic Governor, Godwin Obaseki, is doing. I was in Auchi to launch the fertilizer plant a couple of months ago and recently in this same Local Government I was here to launch the Industrial Park.

“I want to thank the governor and the government and Mista Africa and the APDA for their very execellent job and I hope that within the next few months given the fact that they were able to build this house within 12 days and i am sure that if we work hard the 1,727 housing units can be completed in no distant time,” Osinbajo said.

Earlier, Obaseki said it was in fulfillment of his electioneering promises of creating jobs and providing affordable housing for the people of the state.

“I want to thank all of you for taken time out to witness this ground breaking ceremony of Emotan Garden which we hope will be our flagship into creating modern house style in our state.

“You will recall during my electioneering campaign I did promise that we are going to make Edo State an economic hub. I said we are going to create a minimum of 200,000 jobs in my first time in office and we expected that these jobs will be created from areas like agriculture, construction and the manufacturing sectors.

“But we realized also that housing is very key to creating jobs and that was one of the reasons why one of the first thing to do was to restructure Edo State Housing and Property Development Company.

“We reenacted the law setting it up, we got a new management and this is the evidence of the reforms we have made in that agency,” he said.

The Governor noted that 80 percent of materials used for the building of the houses were gotten locally from the state.

He noted that the government is starting a new paradigm in the position of providing an affordable housing of the citizens of the state.

“We believed that we are starting a new paradigm in the position of affordable housing and we expect that this houses will sell from about N3m to no more than N12m and it will truly be affordable,” he said.

In his speech, the Managing Director of Mista Africa, Mr. Eddy Eguavon, thanked the State Governor for partnering the firm in providing affordable housing for the people of the state.