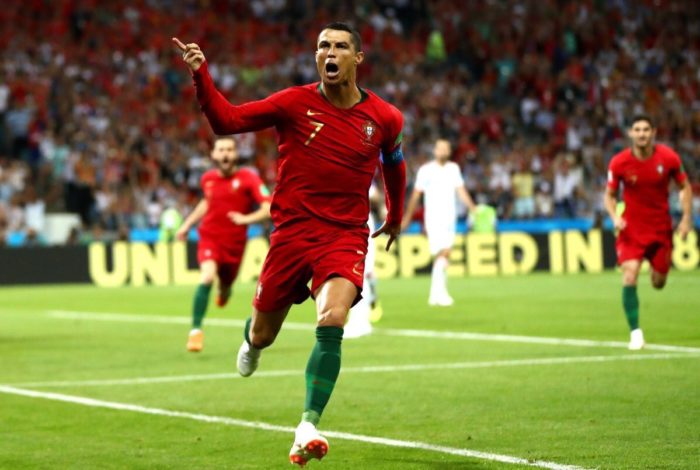 Some football enthusiasts on Friday said that Cristiano Ronaldo had set a very high standard at the Russia FIFA World Cup which would be difficult to break for a very long time to come.

Portugal’s irrepressible captain Ronaldo scored a stunning late free kick to complete a hat-trick and rescue a dramatic 3-3 draw in a thrilling Group B match against neighbours Spain on Friday.

By far the best game of the tournament so far, Spain forward Diego Costa notched a brace before Nacho put them 3-2 ahead with a brilliant third only for Ronaldo to snatch a point two minutes to the end of the game.

Ronaldo became the fourth player to score in four World Cups after Uwe Seeler, Pele and Miroslav Klose. He had also scored in the last four European Championship tournaments.

A cross section of football enthusiasts who spoke in separate interviews in Abuja said Ronaldo had set the competition alight so early with his sensational performance, adding that he was arguably the best player in the world

“It was indeed an unbelievable display from the one and only Cristiano Ronaldo.

“There are no words to describe what we witnessed tonight. It was a simply sublime, stunning, spectacular and sensational performance by Ronaldo in Sochi.

“It left everyone speechless and breathless. To do what he did on that stage; the biggest in world football, tells you the calibre of player he is,” he said.

“What a performance! People who had doubts about Ronaldo saying that his legs have gone and that he isn’t quite the same player, I bet he has made them have a rethink.

“This guy has been outstanding from the word go and has indeed set a very high standard at the World Cup which will be difficult to beat for a very long time to come,” said.

Babatunde Bada, a renowned football pundit said that the game was a perfect stage for Ronaldo to further prove his worth to the world.

“He is a talisman, he is the man that sets the benchmark.

“The game itself presented a perfect opportunity for him to set the records straight about who the best footballer in the world is and I think he has left no one in doubt that he truly is the best.

“The intensity of the game was electrifying and the game had everything about a football match one could possibly think of,” he said.

“Everything you want to see in a game so early in a competition was dished out to billions of football fans all over the world tonight,” he said”

Paul Aigbogun, the Head Coach of Enyimba International Footballl Club of Aba said Ronaldo was focused and delivered when it mattered most, adding that his performance could be compared to that of the legendary Diego Maradona.

“It was a marvellous spectacle and Ronaldo won our hearts. He had the eye of the tiger and looked really focused tonight.

“I have watched Ronaldo in recent times playing for Real Madrid in the Champions league, where it seems like he was coasting a little bit but tonight he was really sharp and fully focused as if he really had a point to prove.

“You could see that he was alive from the beginning, during the warm up and from his first few touches at the start of the game.

“I have to say this is probably one of the most complete performances I have ever experienced in a World Cup, maybe comparable to Maradona’s performance against England.

“This was unbelievable in every aspect,” he said.

Garba Lawal, an ex-international said Ronaldo was a perfectionist and knew when and how to deliver at the biggest stage.

“You know what is incredible about Ronaldo is that he has the ability to deliver at a big stage. The bigger the stage, the more he produces outstanding performances.

“We all felt it, especially from the last goal he scored from 30 yards out. He got over the ball, tucked his shorts up, took few steps backward and a deep breathe. Everyone knew he meant business.

“To deliver that perfection at that stage, this level, is just beyond words” he said.