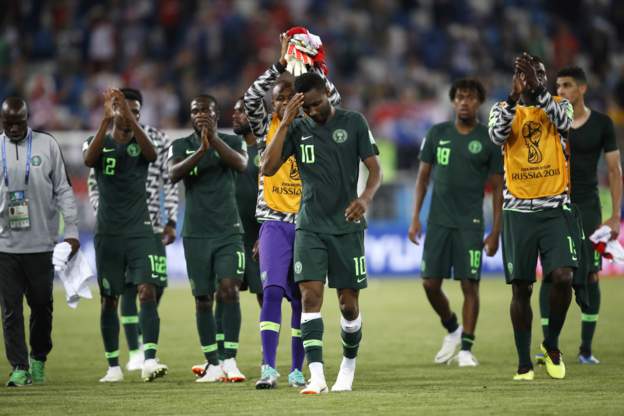 The Super Eagles after the match against Croatia

Former Nigeria forward, Peter Odemwingie has said the performance of the Super Eagles against Croatia was disappointing and poor.

He spoke shortly after the match with BBC Radio 5 Live. The Nigerian team lost 2-0 to the Croatian side in their first game of the tournament.

“It’s a disappointing result and performance, and we only had one effort on goal which was a looping header. Mikel needs to play deeper in the role he is used to with Chelsea and Iwobi needs to play in the middle,” he said.

“I understand the team selection in the first half but we should have changed it when we went 1-0 down. I don’t expect to win the World Cup with this young squad but we can improve,” he added.

Other Nigerians who commented expressed disappointment with the result of the game.

According to Femi: “The Super Flops of Nigeria. Disappointing start.”

One Anon: said “So easy for Croatia, they didn’t get out of second gear, but made sure to put a shift in defensively and compete hard for headers, tackles and second balls. Nigeria obviously need to spend less time choosing suits and more time practising football.”