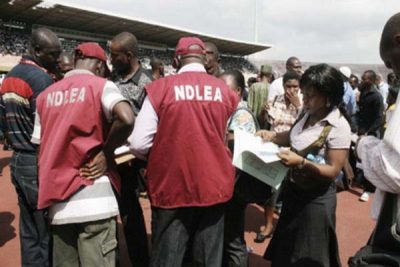 The National Drug Law Enforcement Agency (NDLEA) on Monday said Nigeria might face a drug abuse epidemic due to increasing influx of Tramadol into the country.

Mr Garba Ahmadu, the NDLEA Commander, Murtala Muhammed Airport Command, gave the warning at an event to mark the “UN International Day against Drug Abuse and Illicit Trafficking” in Lagos.

Ahmadu said that the quantity of Tramadol coming into the country was of high volume because traffickers were bringing a lot of it, apart from other drugs such as Methamphetamine and Ephedrine.

He said that due to the vigilance of NDLEA at the Lagos Airport, a lot of departures from Nigeria divert to other West African countries, whenever they were coming to the country.

“If you look at the manifest so far, you will see a lot of departures from Nigeria; but somehow, when they are coming back, you see them diverting to most West African countries.

“There is an upsurge in the quantity of drug seizure, because if you look at what we have been able to arrest in 2017, it is a kind of unprecedented in the last 10 years in terms of quantity.

“Again, if you look at this year, we have almost tripled what we have been able to do; what is surprising about this thing is the quantity of Tramadol coming into the country”.

“The volume is much, because they are bringing a lot of it, apart from other drugs.

“These are things that are very clear and there is a growing increase in trafficking of Methamphetamine, Ephedrine and Tramadol,” Ahmadu added.

According to him, the command has made several arrests in connection with the drug importation which has been very encouraging.

He noted that the theme of 2018 event, “Listen First” was apt, because listening to children and youth was the first step to help them grow healthy and safe.