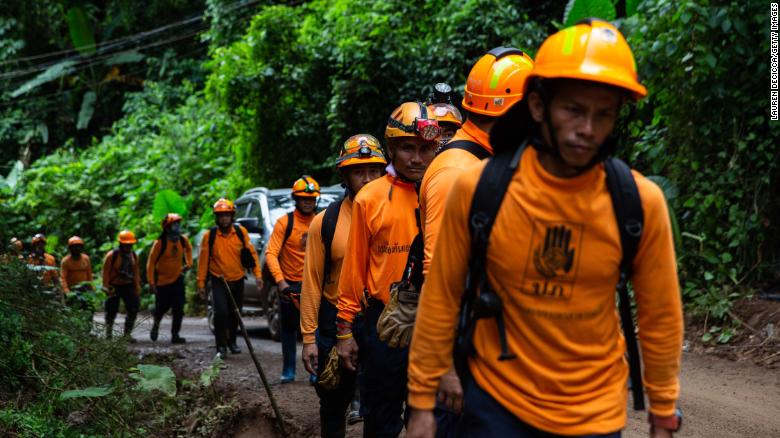 Men from the Department of Disaster Prevention and Mitigation arrive to the cave entrance on July 6, in Chiang Rai, Thailand.

Audiences around the world cheered the successful rescue of 12 boys and their soccer coach from a cave in Thailand with messages of support as the saga generated suggestions of help, prayers and — finally — expressions of relief.

People turned to television, news sites and social media to keep up with the fate of the “Wild Boar” soccer team that went missing while exploring the cave in Chiang Rai in northern Thailand on June 23.

A Google search on Tuesday for the words “Thai cave rescue” revealed 359,000,000 results, with interest peaking when British divers found the boys and the rescue mission began.

“Miracles may happen every day but this is one for the ages,” said Cornell Brooks, chief executive of the NAACP civil rights group in the U. S.

With international journalists stationed outside the cave, television stations have carried updates and the story has ranked highly in terms of the most read or viewed items on sites such as Britain’s BBC and NBC News.

On social media, live Facebook videos from the reporters and volunteers on the ground have been popular.

On Twitter and Instagram, well-wishers sent messages of support, advice and sketches of the boys in the cave using hashtags such as #Thaicaverescue #boarteam #Thainavyseals #PrayForThaiBoys and #Bringtheboarteambackhome.

A Thai navy SEAL Facebook post confirming all 13 had been rescued on Tuesday had more than 200,000 likes and around 56,000 shares in the space of an hour, sparking comments such as: “You are ALL HEROES! Thank you on behalf of a grateful world!” and “On behalf of all mothers I thank you”.

Reaction to the news dominated social media in the United States with the term “All 12” the top trending topic on Twitter.

It even eclipsed reaction to the news of U.S. President Donald Trump’s latest Supreme Court nominee, which was the eighth-ranked topic.

The rescue operation was not a major trending topic on social media in China, where interest in an accident involving a boat carrying mostly Chinese tourists off the Thai resort island of Phuket claiming at least 44 lives generated far more interest.

On Monday on WeChat, the boat sinking generated roughly 10 times the interest of the cave drama, while on Tuesday the cave rescue operation did not rate in the index on the Baidu search engine.