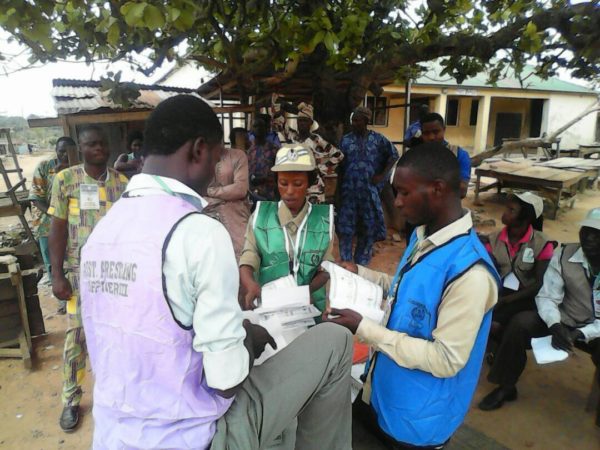 INEC calls for patience over results. Above Sorting and counting of ballot papers in one of the polling units in Ekiti state

EU is partnering with Independent National Electoral Commission (INEC) and the Police to train legal officers on prosecution of electoral offences.

The European Centre for Electoral Support (ECES), made this known during the training of INEC legal officers on “Global Best Practices” organised by the EU in Benin on Tuesday.

The project coordinator of the ECES, Nigeria, Mr Rudolf Elbling, represented at the occasion by Maria-Teresa Mauro, Senior Election Expert (Legal) of the centre, said a similar training on legal framework​ on elections would also be organised for political parties.

He said that under the arrangement, there would be a roundtable with judges of Supreme Court, Court of Appeal and Federal High Courts and those of Election Petitions Tribunal.

He said that the training was aimed at deepening the knowledge and sharpening the skills of lawyers on how to use law and its instruments as veritable tool for the conduct of free, fair and credible elections in 2019.

Speaking on the training for INEC legal officers, the coordinator said it was meant to strengthen the institutional capacity of INEC to address legal issues.

“This training, which seeks to boost the confidence of the legal officers and positively reposition them in handling of elections petitions and front-loading of evidence, is therefore a step in the right direction.

“The legal officers have the responsibility of ensuring that elections and indeed other activities of the commission are conducted in a way consistent with existing laws through proper interpretation and application of the rules.”

Mrs May Agbamuche-Mbu, INEC’s National Commissioner, however, expressed optimism that the training would build the capacity of the legal officers and positively reposition them on writing of briefs and handling of pre and post-election cases.

Agbamuche-Mbu, therefore urged the participants to take full advantage of the training.

She said with the training, the officers would be better informed on the current trends in drafting of legal opinions, contracts, guidelines, regulations and other legal instruments.

While commending the ECES for the support, she stressed the need for continuous legal training in global best practices to keep the commission’s legal officers abreast of current developments in legal profession ahead of the 2019 general elections.

Legal officers for the programme were drawn from different parts of the country.