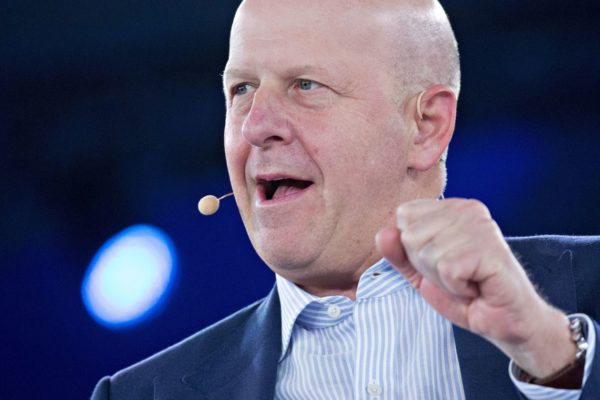 The move was announced together with the bank’s second-quarter earnings, which showed higher profit and revenues from a year ago. Goldman reported $2.6 billion in profits on $9.4 billion in revenue, both well above what analysts had expected and capping the firm’s strongest first-half since 2009. Earnings of $5.98 a share were 50% higher than a year ago and better than the forecast $4.66.

The announcement puts an end to a waiting game that had captivated Wall Street for months. The Wall Street Journal reported in March that Mr. Blankfein was eying an exit later this year, and Mr. Solomon was named sole president soon after, raising expectations of a speedy handoff.

Mr. Solomon will inherit a firm that has worked its way back from near-death during the crisis but faces deep challenges. Its trading business, once a money spinner, has fallen behind that of peers as calm markets and tough regulations imposed after the financial crisis took their toll. The firm’s belated push into consumer banking, where it is building a broad-based offering of savings accounts, credit cards and wealth-management tools, will take years to make a meaningful contribution.

“David is the right person to lead Goldman Sachs,” Mr. Blankfein said in a statement, praising his successor’s track record of developing new businesses and working to improve Goldman’s culture.

Quarterly gains were broad-based across the business, with each of Goldman’s four main divisions reporting double-digit revenue gains from a year ago. But trading results fell short of investor hopes that had rallied in recent days as rivals reported their results. Goldman shares were down 1% premarket.

Goldman’s investment bankers, Mr. Solomon’s former realm, had their third-best quarter on record, cracking $2 billion in revenue for the first time in three years led by strong stock underwriting. Corporate CEOs have been little rattled by the geopolitical turmoil or headlines out of Washington and are continuing to do deals and take advantage of open markets to raise capital. The firm said its backlog of transactions had grown since March.

Goldman’s shares are the worst-performing among big U.S. banks this year, down 9%. Investors, who cheered bank stocks in the wake of the 2016 presidential election, have turned less enthusiastic, rattled by the potential for a protracted trade war and a narrowing gap between short- and long-term interest rates.

Mr. Solomon will be the third Goldman CEO since the company went public nearly two decades ago. The first, Henry M. Paulson Jr., went on to serve as U.S. Treasury Secretary under President George W. Bush.

Mr. Blankfein, a longtime trader and lawyer who rose through the firm’s commodities business, guided Goldman through the financial crisis and the public scrutiny that followed it.

“When I’ve been asked about succession in the past, it’s always been hard for me to imagine leaving,” Mr. Blankfein said in a memo to Goldman employees Tuesday. “When times are tougher, you can’t leave. And, when times are better, you don’t want to leave.”

“I look forward to watching him lead Goldman Sachs for years to come,” he said.