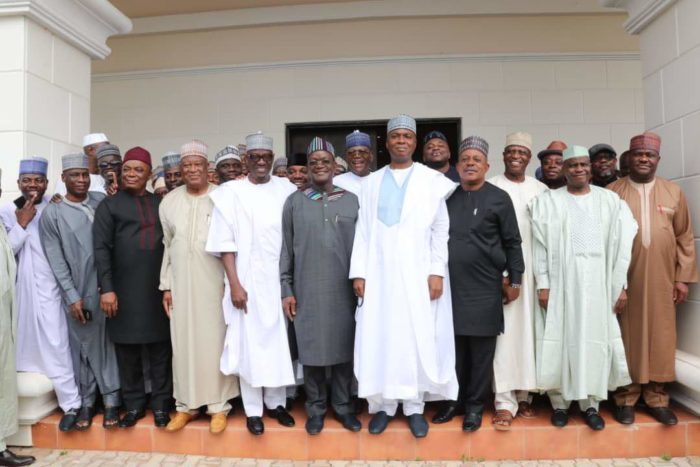 The decampees and the PDP leadership

All is set for the Senate President Bukola Saraki and three governors of the All Progressives Congress (APC) to decamp to the Peoples Democratic Party (PDP) next week.

Governors decamping with Saraki to the PDP include those of Kwara, Abdufatah Ahmed, Samuel Ortom (Benue) and Aminu Tambuwal (Sokoto)

A meeting to formalise the defection of the top APC chieftains to PDP was held on Wednesday in Ilorin, the Kwara State capital, with top PDP chieftains like Uche Secondus (National Chairman), Governor Nyesom Wike (Rivers), Alhaji Sule Lamido, Barnabas Gemade, in attendance.

Also in attendance was Kawu Baraje, leader of the Reformed All Progressives Congress, R-APC.

Sources at the meeting revealed that the APC decampees would announce their defection to PDP before 27 July.

Saraki had during a rousing welcome in Ilorin on Tuesday told his supporters to await further announcement on his next political moves.

Reports of Saraki and some of his associates quitting the APC had been rife for sometime now following the Supreme Court dismissal of charges of false declaration of assets filed against him by the Economic and Financial Crimes Commission (EFCC).