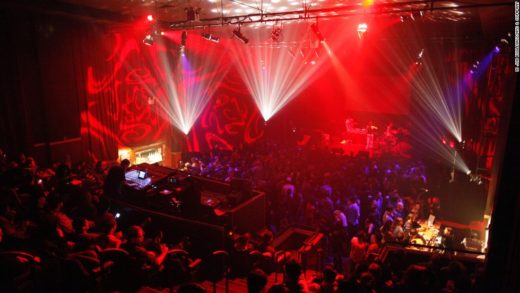 An entertainment promoter, Panache Paulash, says his initiative of inviting celebrities to appear at nightclubs has continued to boost patronage and strengthen the industry.

Paulash told the News Agency of Nigeria (NAN) in Lagos on Tuesday that getting celebrities to appear at nightclubs was, however, not cheap.

He said that he used to pay some of them before they would accept to grace the dance floor of nightclubs.

Paulash said, “Club owners know that having big celebrities to show up at their clubs will definitely draw large crowds willing to pay almost anything to get in and buy drinks.’’

The promoter rated seventh among the top 10 young entertainment personalities in the country by Charlene K-WordPress.com, saying that nightclub’s life was all about innovation, marketing and promotional methods.

“Finding the right mix of events is important because certain groups will be attracted by whatever is popular, while others will look for something not available else.

“ This is where the choice of a celebrity’s appearance at nightclubs comes to play,’’ he said.

Paulash also said that a good promoter would always go for celebrities that could influence substantial fans and admirers to nightclubs.

“Then, the promoter and the celebrity will discuss and agree on terms and conditions; mostly in cash and, sometimes in kind,’’ he said.

Paulash said that nightclubs hosting stars always benefited from the influx of major spenders, who would eventually, become such nightclubs’ brand ambassadors.

He said that he had been a promoter of television stars, notable actors, comedians, famous musicians and rappers at nightclubs over the years.

Paulash added that he had also promoted DJs, famous models, social media celebrities and influencers, socialites, as well as a selected group of sexy ladies.

He said that he had also promoted celebrities from the movie industry, beauty pageants, comedians, public figures from social media, sport personalities.

Paulash added that he had worked in: Quilox, Rumours, Cubana, Phantom, House 38, Club Litehouse, The Place, Crystals, Club 57, and other major clubs in Lagos

“ The celebrities while at the nightclubs usually pose for pictures with the big money spenders (big boys and girls) as well as with their fans.

“They will then take to the dance floor and dance to music played by stand-by musicians.

“ The presence of celebrities at nightclubs can be quite lucrative as it encourages high sales of alcohol which always bring the big profits to such nightclubs.

“Indeed, the ambience of a celebrity at a nightclub can mean a big boost to the business, “ he said.

According to Paulash, working as a club promoter is a passion he started about seven years ago while he was in the university.