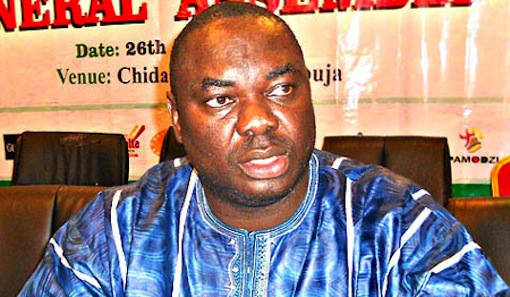 Chris Giwa, the embattled president of the Nigeria Football Federation (NFF), says truth will prevail between him and Amaju Pinnick, on who ought to be the president of NFF.

Giwa told the News Agency of Nigeria (NAN) on Tuesday in Abuja that no amount of intimidation would make him give up his mandate to be the NFF president.

Battle for the seat started shortly after Pinnick won a parallel election in Warri in 2014.

The NFF Congress had disregarded the order of a Jos High Court to stay action on the Warri election until the determination of the suit brought before it by Giwa.

Three weeks ago, a group led by Giwa stormed the NFF Secretariat and took control on the strength of a court ruling, but on Monday, Giwa was asked to vacate the seat by the government.

The government said that it gave the order because Nigeria would respect world football body’s position on the matter, which recognised Pinnick as the President of NFF.

Giwa told NAN that he would relinquish his mandate, which was given to him in an earlier election by the NFF congress in Abuja.

Giwa urged his supporters to be calm as the rule of law runs its course.

“By the grace of God, we employed patience to go through the judicial system of the land as guaranteed by Article 1.1 of the NFF Statute to reach where we are.

“Except if the law and the judiciary is no more significant can what happened on Monday be allowed. Evil will not thrive over good.

“I urge our friends, allies and supporters to remain calm. Truth shall return to the centre stage in a couple of hours.

“What you have seen is like the different scenes in a Nollywood film. All I know is that the rule of law will not lie low against the rule of might and influence peddling,’’ he said.

In a related development, the Pinnick-led board, in a statement, said that with the latest development, all plans and programmes of the various national teams would proceed accordingly.

The board said that it hoped the League Management Company would put arrangement in place for the resumption of the Nigeria Professional Football League.