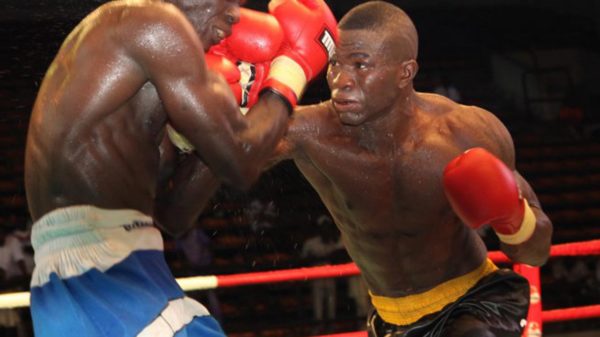 Boxers billed to fight in the 15th edition of GOtv Boxing Night holding at the Indoor Sports Hall of the Liberty Stadium, Ibadan, on Sunday, have been talking tough.

Oto “Joe Boy” Joseph, the reigning African Boxing Union (ABU) lightweight champion, who will be defending his title against Ghana’s Nathaniel Nukpe, has boasted that his challenger will regret coming to fight.

On his title defence, Joe Boy said: “The belt will remain with me. Nukpe will return to Ghana badly beaten and empty-handed. He is here for sightseeing and punishment.”

Fijabi, a knockout specialist is of the view that Ariyo is way beneath him in boxing terms.

“I once defeated him and I will repeat the trick. He calls himself Iberu (fear), but he will experience the greatest fear when we get into the ring,” bragged the explosive boxer.

Ibadan-based Akeem “Dodo” Sadiku, who is reputed for his savage punching capability, has also warned his opponent, Franc Houvanegbe of the Republic of Benin, to prepare for the worst. Dodo, whose last fight ended in a knockout in his favour, boasted that he will finish off the Beninoise in the same fashion.

Promising heavyweight boxer, Daniel “Big Shark” Emeka, in an interview, said he is happy to make his professional bow in Ibadan and promised to make it one that his opponent would not wish to remember.

Other fights on the card include a national cruiserweight clash between Idowu “ID Cabasa” Okusote and Michael “Lion Heart” Godwin; a national lightweight duel between Prince “Lion” Nwoye and the fast rising Ridwan “Scorpion” Oyekola; and a national light welterweight contest between Vincent “Dada” Essien and Segun “Showboy” Olalehin.

The event, sponsored by GOtv and Bet King, will be beamed live on SuperSport in 47 African countries. The best boxer at the event will go home with a cash prize of N1 million alongside the Mojisola Ogunsanya Memorial Trophy.