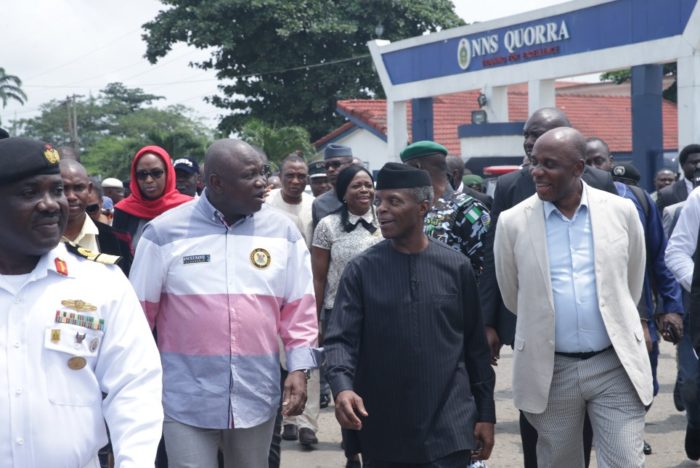 Nigeria’s Vice President, Professor Yemi Osinbajo on Thursday assured that the anticipated reconstruction of the Apapa-Oshodi Expressway would commence within the next two weeks as part of the Federal Government’s resolve to finding lasting solution to the chaos in the Apapa axis.

Osinbajo, who spoke at a dialogue with stakeholders on the Apapa traffic congestion in company of the State Governor, Mr. Akinwunmi Ambode; Minister of Transportation, Rotimi Amaechi; Managing Director of Nigeria Ports Authority (NPA), Hadiza Bala-Usman, among others, held at the Officers Mess of the Western Naval Command in Apapa, said the Federal Government was already looking into the issue of infrastructural renewal, especially with the state of roads in Apapa, adding that approvals for the reconstruction of Oshodi-Apapa Expressway and other major roads linking the Apapa Tincan Ports and tank farms would be concluded within the next two weeks.

The VP, who also led others to inspect the Apapa axis, said there was no excuse on the part of the Federal Government on the state of affairs in the area, noting that aside the economic implications, it was also an important residential community that must be allowed to thrive.

“We have been working quite hard now to get approval for road construction. Among the roads are the Apapa-Oshodi Expressway and Mile 2- Liverpool roundabout are important roads but they have been delayed but I am personally working to ensure that we could get that through and we are trying to look at immediate solutions that can be done and how the process could be expedited to achieve results.

“I can guarantee that we will get all the approvals done. I don’t think that it should take us more than two weeks to get the approval so that we can begin the work. There are so many other bad areas, especially the Coconut area in front of Tincan Port, the Leventis to Wharf Road is also another area we are looking at, the rehabilitation of the Creek Road so that we can have a two lane access into the ports and all of those are important roads and all of them are Federal roads, so we have a responsibility to ensure that these things are done,” Osinbajo said.

On the situation with Ports across the country and the need to decongest the Apapa Tincan Ports, the Vice President listed insecurity as one of the major issues preventing the Ports in Port Harcourt, Warri, Onne, Calabar and others from operating, however, adding that the Federal Executive Council had recently approved a security arrangement in the Ports to enable them function optimally.

“A few weeks ago, the Federal Executive Council approved a maritime security arrangement for all of those areas and that has already been deployed. So we expect that as soon as the security architecture is laid out, we should be able to use those Ports frequently and that would of course decongest the Apapa Tincan Ports,” Osinbajo said.

Addressing other issues involving the movement of cargo from the Apapa Ports, the Vice President said the Federal Government was in talks with a concessionaire to rehabilitate the narrow gauge rail, which according to him, will aid the quick movement of goods pending the construction of a standard gauge.

“As Mr. President had directed, what I intend to do, is that we should meet as frequently as possible. We have already drawn up some roadmap and a check list of the various things that we need to do in the next couple of weeks to ensure that we are able to ease the situation around here and make it more decent for people to live in this community and work in this axis. It is important for us as a country and commercially also and we are definitely committed to making sure that it works,” Osinbajo said.

Speaking shortly after an on-the-spot assessment in the Agejunle area, Governor Ambode wielded the big stick and ordered the immediate shutting down of Climax Bonded Terminal in Ajegunle, saying that their operation was not only illegal but also causing untold hardship to residents in the area.

Ambode, who was saddened by the situation in the area shortly after an on-the-spot assessment, directed that the terminal and other adjoining areas be closed, while the trucks parked around the terminal be evacuated within the next 24 hours.

He said the decision to shut down the place was in furtherance to the need to protect residents from imminent dangers which such building portends, saying that the primary responsibility of the Government was to protect lives and property.

“You guys are causing me a lot of havoc. So, as far as the Lagos State Government is concerned, Ajegunle remains a residential area. I have crosschecked from all the ministries and officials, there is no approval from the Physical Planning for you to use this neighbourhood which is residential as a bonded terminal and then I understand that you are extending to Awodiora.

“I don’t want to do too much problem with your owner, but whoever is the owner would have to come to the Ministry of Physical Planning. I have the duty to protect all the citizens of Lagos State, I will not allow anything you have called Bonded Terminal to reside in a residential area and I need to protect my people,” Ambode said.

Speaking further, the governor said the presence of trucks parked on the single lane road in the Ajegunle axis was subjecting residents to long hours in traffic and other attendant menace to the environment.

“It’s bad enough that the roads here are single lanes and then I’ve gone round the whole Ajegunle axis and I’ve seen all the trucks all over the place, so I take over all the places called bonded terminals in Ajegunle from this moment, I shut this place down and all the agencies concerned should take my instructions, I do not no want to ever see this place opened again including all the other places that they have put the terminals and other places they have procured, I would not authorize any place that is residential as a Bonded Terminal.

“Tell the Commissioner of Police, tell others, every person here must evacuate in the next 30 minutes and in all the other locations that they have put in place, they remain under lock and key until I say otherwise. Including Customs, including everybody, tell the CP and the Naval people, I don’t ever want to see it open again. All the trucks that I’ve seen across this axis, in the next 24 hours, I don’t want to ever see it here again and all the other places they have placed them, the Government Monitoring Unit and tell the Director DSS, I don’t want to see anybody here again. Whatever it is that they have put here, I would only open it when they are willing to take all these trucks away from here and that’s my instruction,” Governor Ambode said.

Also in his remarks at the dialogue with stakeholders, Ambode said the meeting was critical as the situation had become a national emergency that required all levels of government to work together to save the economy of the nation and also restore the glory of Apapa axis.

“I want to reiterate my commitment to say that whatever it is that is assigned to me as part of the resolutions that Lagos State should do, we are committed to doing it and we would also cooperate with the Federal Government and every other stakeholder to make sure that we have a permanent solution to this Apapa crisis,” the governor said.