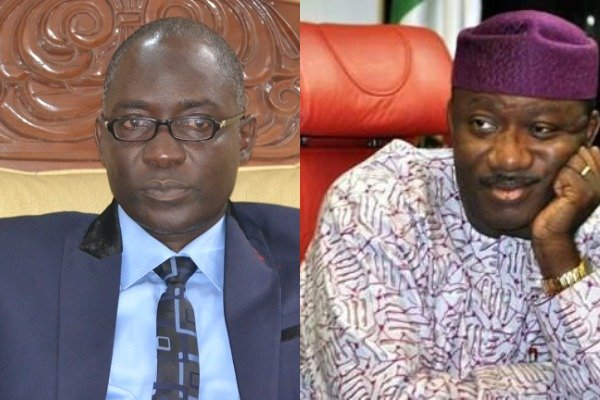 The governorship candidate of the Peoples Democratic Party, (PDP) in the July 14 election in Ekiti, Prof. Kolapo Olusola-Eleka has filed a 700-page petition before the Election Tribunal sitting in Ado Ekiti.

The News Agency of Nigeria, (NAN) reports that the candidate along with his running mate, Mr. Deji Ogunsakin and a member of his legal team, Mr.Ola Olanipekun, (SAN) and scores of others, arrived the state high court premises at about 6:00pm, armed with heaps of documents to justify their petition

Eleka, whose main prayer before the Tribunal was that he be declared winner of the election, said the APC candidate, Dr. Kayode Fayemi earlier declared the winner of the poll “stole” his mandate.

He had come to the Tribunal to beat the 21-Day deadline allowed under the Electoral Act, which expires tomorrow Saturday.

However, the leader of his legal team, Yusuf Alli, (SAN) and other lawyers were absent during the submission of the petition to the court registry.

Eleka, while addressing journalists claimed his petition contained empirical evidence, to show that figures were falsified in favour of Fayemi. He also alleged that ballot boxes were either stuffed or snatched, while there was intimidation of voters and party agents from polling booths.

” The election was openly manipulated by political desperadoes, using instruments of the Federal Government”, he claimed.

” I am challenging the election results not out of desperation to be governor, but for reasons of future and posterity, and largely on behalf of the people of Ekiti, who were taken aback by the outcome of the election

” Without doubt, the will of the people was subverted by those who have chosen to take Nigeria back to the dark days of ballot stuffing, ballot boxes snatching and outright falsification of election results and I believe they deserve to get justice

” As law abiding citizens of our country, the only path of honour to take in a situation like this is the process that we have initiated today, to seek redress against the use of security forces and other instruments of the federal government to suppress the will of our people

” In doing this, I have presented overwhelming discrepancies in the results declared by INEC to the tribunal to adjudicate upon and I am confident that the popular mandate of the people of Ekiti will not go unrestored

” I therefore want Ekiti people to keep hope alive, remain strong and resolute in their belief in God

” While we go through this judicial walk to exposing the electoral thievery of July 14, 2018, we urge the good people of Ekiti State, especially my teeming supporters to remain calm, peaceful and prayerful, bearing in mind that those who stole their mandate will not enjoy the benefits for long