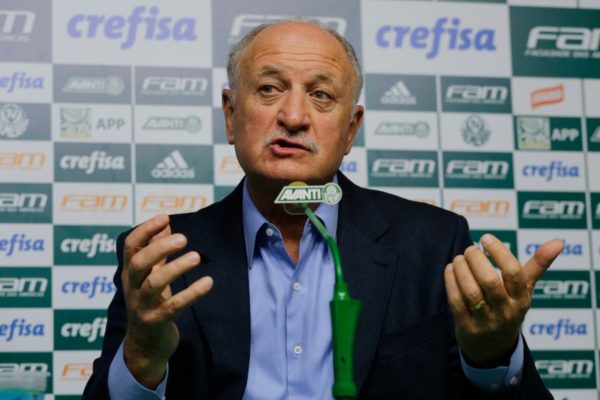 Former Brazil manager Luiz Felipe Scolari says that he is motivated to win every trophy possible for Palmeiras as he returns to coaching in his homeland after a three-year absence.

The 69-year old faced reporters for the first time since his July 27 appointment in a packed news conference at the Palmeiras Academy of Football in Sao Paulo on Friday.

“It makes me very happy to be back at Palmeiras,” Scolari said. “I am motivated and certain that we can have a good team that is able to win a lot more.”

Scolari signed a two and a half-year contract with Palmeiras after the sacking of Roger Machado due to a poor run of results.

It is the former Portugal and Chelsea manager’s third spell in charge of the nine-time Brazilian Serie A champions.

He led them to the 1998 Brazilian Cup and 1999 Copa Libertadores – South American football’s top club trophy – during his first stint and again lifted the Brazilian Cup during his second tenure in 2012.

Scolari’s return match for Palmeiras, who are currently sixth in the 20-team standings, will be an away clash with Atletico Mineiro on Sunday.

“The last time I was here, in 2012, we were an itinerant team. We played in Barueri, Caninde, Presidente Prudente. We didn’t have a stadium. Now we have a stadium that is marvellous,” he said.

When asked what his objectives are for the rest of 2018, Scolari replied: “We are not going to give priority to any tournament. We have three: the Brazilian league, Copa do Brasil and the Copa Libertadores. We aren’t going to prioritize any of them. We have to try to win them all.”

Scolari has not coached in Brazil since parting ways with Gremio in May 2015. In July 2014, he was in charge of the Selecao side that suffered a humiliating 7-1 loss to Germany in the semifinals of the World Cup. He was also manager of the Brazil team that won the 2002 World Cup in Japan and South Korea.

The Brazilian’s last coaching job was with China’s Guangzhou Evergrande, where he won seven titles before parting ways with the club in November last year.

When asked whether he was still affected by the 2014 loss to Germany, Scolari replied: “The last Brazil World Cup title was in 2002 when I was coach. The last Brazil team that lost at the World Cup didn’t involve me.

“Brazil was fourth at the 2014 World Cup and we all know that nobody can mask the defeat that we suffered then. But life goes on,” he added.