Onikan Stadium will be ready January 2019 as scheduled - Sports Commission 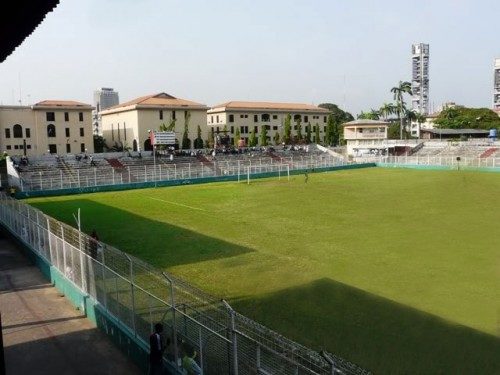 The Chairman, Lagos State Sports Commission (LSSC), Kweku Tandoh on Tuesday assured the residents of the state and Nigerians that the refurbished Onikan Stadium will be ready by Jan. 2019 as scheduled.

Tandoh gave the assurance while conducting an on the spot assessment of the ongoing refurbishment at the stadium.

The stadium is famous for being the home ground for top Nigerian clubs such as Stationery Stores FC, First Bank and Julius Berger and has a sitting capacity of 5,000.

The stadium also played host to the 1999 Youth World Cup, hosted by Nigeria.

Tandoh said that the stadium would be having a new nomenclature when it would have been delivered from a stadium to an International Multipurpose and Entertainment centre.

“A lot of people have been describing this place as Onikan Stadium but from what is going on here, this place has been turned to the new Onikan Multipurpose and Entertainment Centre.

“This is because the usage of this place will not just be for sports alone, it will serve as a multipurpose centre in line with Gov. Ambode’s vision of fusing sports, hospitality and tourism to achieve a vibrant economy.

“The contractors and the consultants have been working according to the FIFA standard and specification in terms of pitch dimension, dressing rooms and other facilities,” he said.

“I am not only satisfied with the pace of work here but I am also excited because this place will be transformed to a tourism arena.

“I mean the whole Onikan axis which will also have a museum with a multi-level car park. We are assuring the public that the ongoing reconstruction of this place will be completed come January 2019.

“The pitch is also according to the FIFA specification which is a hybrid pitch different from the artificial turf. This will enable us to accommodate all FIFA competition.

“We want to become the sports hub of Africa, so we want to do this with our standard. I am impressed with the level of work here and the professionalism put into it,” he said.

On the project, the Managing Director, Slavabogu Nigeria Ltd., Zekeriya Oktem, said the responsibility to deliver a world class stadium was high on the company’s shoulders.

“The responsibility of this international centre is high on our shoulders, because historical matches will be played here and we want people to come and enjoy themselves.

“We are making it as comfortable as we can and the entire special features are well taken care of. The facilities will support the fans relaxation.

“The pitch is 68 by 105, but that is not our concern, it is the FIFA specification and peoples comfortability,” he said.

Onikan Stadium is under reconstruction with special features added to it such as modern conference rooms and a Media Tribune that will accommodate 48 journalists.

Also, there is food and beverages section, a hybrid pitch and a concert hall among others.