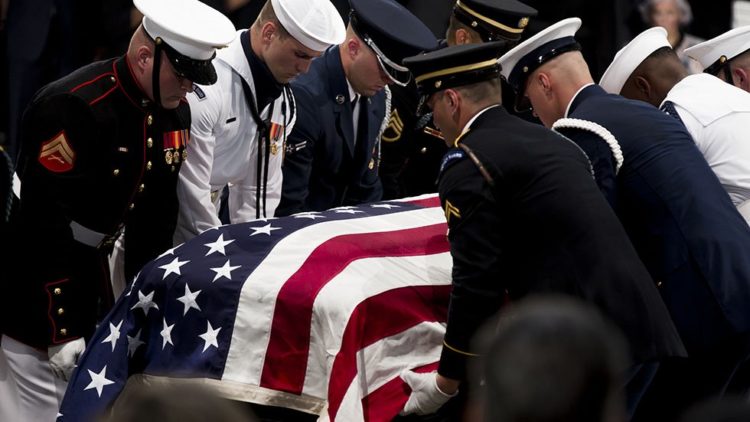 Lowering the casket of Senator McCain at Naval Academy in Maryland, USA

The late United States Sen. John McCain has been laid to rest, as he wished, at a private ceremony at the U.S. Naval Academy in Annapolis, Maryland.

The burial on Sunday climaxed the week of tributes from the two sides of political divide in America, except from President Donald Trump.

McCain, who retired from the U.S. Navy at the rank of captain, was buried in a plot of land next to his Naval Academy classmate and lifelong friend Adm. Chuck Larson, who died of leukemia in 2014, the The Hill reported quoting Associated Press.

According to The Hill, mourners and the senator’s family walked behind a horse-drawn caisson carrying his casket from the Naval Academy chapel to the cemetery after the ceremony. Students from McCain’s 1958 graduating class also joined.

Graham said before the service that he wanted to talk about how “nobody loved a soldier more than John McCain, that I bear witness to his commitment to have their back, travel where they go, never let them be forgotten,” according to the news service.

Dozens of political power players from both parties gathered for a memorial service at the Washington National Cathedral on Sunday. Multiple speakers at the event made subtle swipes and references to Trump and the decline of civility in U.S. politics.