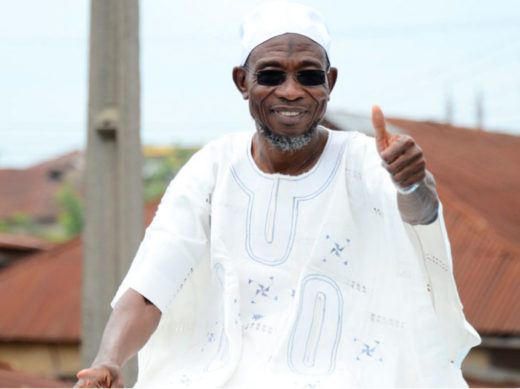 Gov. Rauf Aregbesola of Osun has expressed optimism that Alhaji Gboyega Oyetola, the All Progressives Congress (APC) candidate, would win the Sept. 22 governorship election in the state.

Aregbesola spoke in Ile-Ife at the party’s inaugural campaign visit to the palace of the Ooni of Ife, Oba Adeyeye Ogunwusi.

Sola Fasure, a media aide to the governor, said in a statement on Thursday that the APC delegation was in the palace for royal blessings.

The governor said the best hand to continue his good works in the state was Oyetola, adding that he was carefully selected to take the state to the Promised Land.

The governor said Oyetola’s era would usher in steady and continued pace of development which his administration had achieved.

He described Oyetola as trustworthy, honest, loyal and truthful, adding that he performed excellently well when he was his Chief of Staff.

Aregbesola said Oyetola had justified his capability as a man of impeccable character who remained dogged and committed to all policies that had impacted positively on the lives of the citizenry.

“We are not in doubt about Oyetola’s competence and ability.

“He is calm and much more reserved. He knows the job and he will serve our people well,’’ he said.

Responding, Ogunwusi commended Aregbesola’s administration for being committed and focused on taking the state to an enviable heights.

The monarch urged Oyetola to consolidate on the good legacies the Aregbesola’s administration had recorded if elected.