Golden Eaglets to face Ghana’s Starlets for ticket to Tanzania 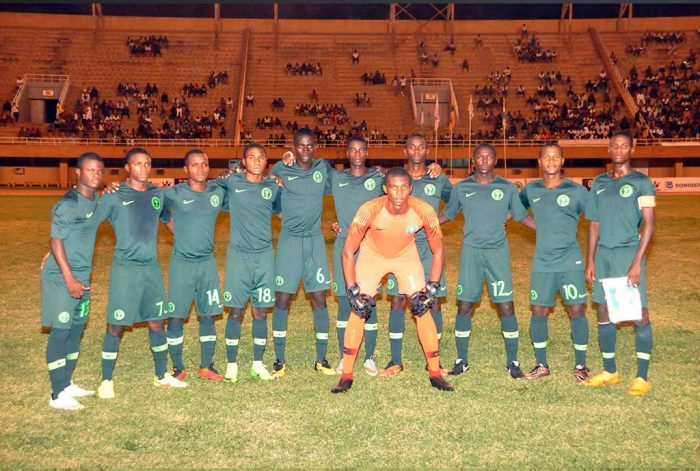 Nigeria were 2-1 winners over hosts Niger Republic on Wednesday in Niamey to book a date with Ghana and rekindle a 67-year-old Nigeria-Ghana rivalry.

The victory ensured the Golden Eaglets will take on the Black Starlets in Niamey on Saturday for a place in the 2019 Africa Under-17 Cup of Nations finals billed for Tanzania.

The Eaglets kept their heads and did the hard work they had to do by beating hosts Niger Republic 2-1 in a very competitive match at the General Seyni Kountche Stadium.

It was sweet revenge for the five-time world champions, as the Nigerien side had knocked out the Eaglets from the 2017 Africa Under-17 finals on a 3-2 aggregate.

That was when the home-and-away leg contests still held sway in the African qualifiers.

Following a change in the old format, countries in each of Africa’s six football regions now gather in one venue to take part in qualifying tournaments.

Only the winning teams are now eligible for the final tournament, with the region of the defending champions producing two qualifiers.

Akinwumi Amoo set the Eaglets on their way with a fine finish from a pullout in the 45th minute.

Olakunle Oluwasegun, who was later named “Man of the Match’’, made the scoreline comfortable with another magnificent strike two minutes before the hour.

He had scored a brace in the 2-3 defeat to Burkina Faso in their opening match and another in the 5-1 mauling of Cote d’Ivoire last week.

The home team pulled a goal back late on but the Nigerian boys held on to qualify for the final match against Ghana.

The Ghanaians had earlier defeated Cote d’Ivoire in the first semi-final match played at the same venue.

The finals of the 2019 Africa Under-17 Cup of Nations will hold in Tanzania.