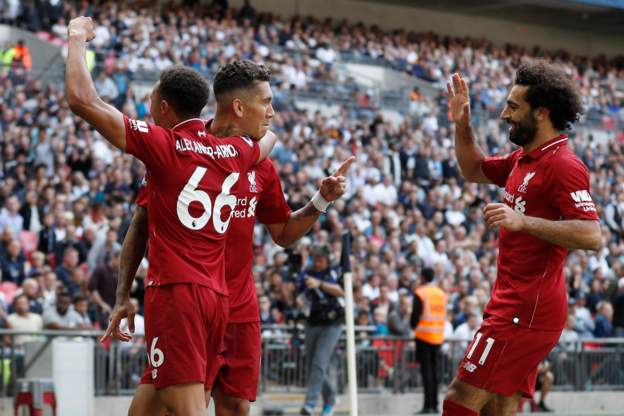 Liverpool displayed a scintillating performance to remain top of the English Premier league with a 2-1 victory over Tottenham at Wembley on Saturday.

The Spurs keeper failed to deal with a James Milner corner at the near post and Toby Alderweireld’s clearance was headed straight back at goal from Georginio Wijnaldum.

Vorm got both hands on it as it sailed over Kieran Trippier’s head, the only problem was that he was about a foot behind his goal-line as he pushed it away.

On 59th minute, the visitor doubled their lead through Roberto Firmino.

Sadio Mane was the architect of this goal with his energy and pace down the left, but Michel Vorm would feel he could have done better again.

Vorm could do nothing as Mane’s low cross was turned against his own post by Jan Vertonghen but, with the Spurs keeper on the ground, he saw the ball bounced back through his hands and perfectly into the path of Roberto Firmino, who was standing on the goal-line to convert the easiest goal he would score in his life.

Tottenham fought back to reduce the tally through Erik Lamela on 93 minutes.

A corner was allowed to come through all the way to Erik Lamela at the back post and he brought the ball down before burying it with a sweet finish.

On the touchline, Reds boss Jurgen Klopp was laughing. He’s been lambasting his side for not putting this game to bed.