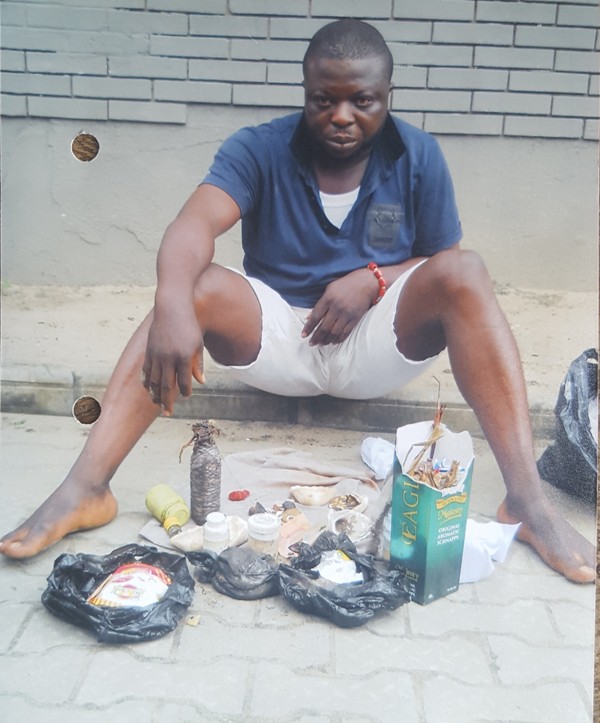 A 38-year old suspected fake spiritualist, Fadayo Olaleye has been arraigned before a Lagos Magistrate Court for allegedly obtaining the sum of N350,000 from a 17-year old apprentice, Kamila Akindele on pretext to use the money to cast out evil spirit tormenting him from his family.

The accused, according to investigation, also promised to use part of the money to buy some spiritual items to pray for the teenager and prepare success charms for him, a claim the police said he knew was false.

A police source alleged that one Bayo Adeoye, a dealer in iron rod at Abraham Adesanya area of Ajah, Lagos reported to the Divisional Police Officer, DPO in charge of Ajah Division, Lagos that he left his apprentice, Akindele in his shop with the sum of N350,000 to pay his iron rod supplier, but that before he came back, his apprentice handed over the money to someone else.

The source said that following the report, the DPO directed Sgt Charles Asikoje to take the teenager along to assist him to locate the person who collected the money from him and that the police tracked the accused to his shrine and arrested him.

Narrating the incident to the Police, Akindele allegedly stated,”Olaleye accosted me on the road on the day of the incident where I went to eat food and said that he saw a vision that evil spirits from my family had dug holes in my hands spiritually to ensure that each time I have money, I would not know how to spend it and what I spent it for. And I replied that it was true that each time I had money, I do not know how I spend it.

“The accused later directed me to go and look for N1,000,000 for him to solve the problem so that each time I had money, I would know how to spend it and I told him that I would not be able to raise the money because I was an apprentice. But the accused assured me that money would come my way to solve the problem through God’s divine intervention.

“Luckily, when my boss entrusted the sum of N350,000 in my care to pay our iron rod supplier, I quickly call the accused to informed him about the money and he directed me to bring the money to him somewhere to solve my problem and I took the money to him.

“But I was shocked after the accused collected the money, I did not hear from him again until police arrested him,” he said.

During investigation, according to the police, the accused allegedly confessed to the crime and said that he collected the N350,000 from the teenager to feed his family because he could only see vision for people but could not solve their problems.

Olaleye from Ilesha, Osun State was charged before an Ighosere Magistrate Court, Lagos on a two-count charge of obtaining money under false pretence and stealing.

Police Counsel, Okete Ejime informed the court in charge No H/67/2018 that the accused committed the offence on 2 May, 2018 at G. Cappa area of Ogombo, Ajah, Lagos.

Ejime told the court that the accused deliberately tricked the teenager to steal his master’s money for him to solve non-existent problem knowing full well that there was nothing like that.

He said the offences the accused committed were punishable under sections 314 and 287 of the Criminal Laws of Lagos State, 2015.

The accused, however, pleaded not guilty to the charges in the open Court and Magistrate O.O Omishore granted him bail in the sum of N200,000 with two sureties in like sum.

Omishore adjourned the case till 17 September, 2018 for mention and ordered that the defendant be kept at the Ikoyi prison, Lagos.