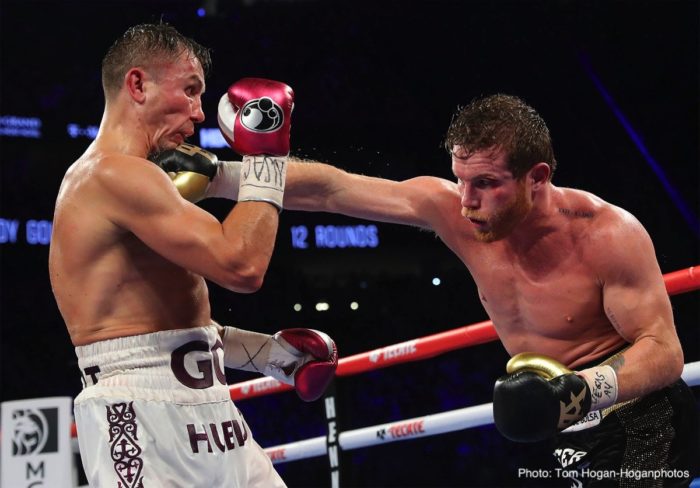 Saul ‘Canelo’ Alvarez claimed the WBC and WBA world middleweight titles by inflicting a first career defeat on Gennady Golovkin with a gripping points win in their Las Vegas rematch.

The Mexican claimed a frenetic final round on two of the three scorecards which was critical in preventing a repeat of the draw both men shared 364 days earlier at the same T-Mobile Arena venue.

It gave him a narrow a 114-114 115-113 115-113 majority decision to edge a contest in which both men were cut and where each showed why they are among the finest practitioners in the sport.

Golovkin, whose first defeat comes in his 40th bout, left the ring immediately without conducting an interview as his rival – fighting for the first time since serving a six-month drugs ban – celebrated.

“My corner told me I needed to win the final round and that’s what I did. I’m very emotional,” said Alvarez, who has previously held world titles at middleweight and light-middleweight.

Golovkin told reporters afterwards: “I’m not going to say who won tonight, because the victory belongs to Canelo according to the judges. I thought I fought better than he did. We would like to have a third fight, we will negotiate that, that’s what we want.”

Alvarez looked close to tears after a decision which will again prompt controversy as, for spells in the fight, Golovkin seemed to be edging the physical side of a tactical battle, with his jab proving key early on.

But with scoring already criticised in their first bout before Alvarez’s two failed doping tests in February, it is perhaps not surprising that once again controversy will remain attached to this rivalry, with demand for a third meeting almost guaranteed.

Few could argue the hype surrounding their second meeting was not justified as the bout ebbed and flowed. Celebrities including actors Will Smith and Denzel Washington, and sports stars such as Mike Tyson and LeBron James, sat ringside as more than 21,000 inside the arena were taken in by a bout in which neither man looked like capitulating even when under solid attack.

After Golovkin’s poised jab clearly won the opening three minutes, Alvarez’s response in the second – including a solid right uppercut – pointed to the back-and-forth contest that was to come.

All four judges gave ‘Canelo’ four of the opening six rounds despite some of the more eye-catching work coming from Kazakhstan’s Golovkin, who landed a notable left hook in the fourth.

But Alvarez – who sustained a cut above his left eye which worsened as the bout developed – visibly began to close distance in order to nullify Golovkin’s jab. At times their heads were almost touching, bringing hooks and uppercuts into focus, and Golovkin sustained his own cut from a head collision.

Alvarez, a man steeped in the art of fighting with six brothers who also hold professional boxing records, remained game in walking forward repeatedly, a contrast to his a largely back-foot performance last time.

His mother was pictured praying at ringside after a ninth round which saw both men launch repeated attacks and Alvarez almost came unstuck in the 10th as a left hook to his jaw briefly rendered him limp, only for him to somehow quickly rediscover his poise.

But his work up close perhaps won the judges over. Ringside stats showed Alvarez landed 46 body punches compared to six from his rival but after landing a right to the body and left to the face in the final round, he ate two uppercuts in the closing 10 seconds as both men responded to the noise around them.

They embraced before each raising their hands but the cards prompted Mexican celebration on the country’s Independence weekend.

“If the people want another fight then we’ll do it again,” said Alvarez, beaten only by Floyd Mayweather in a 53-fight career. “We’ll do it, no doubt.”