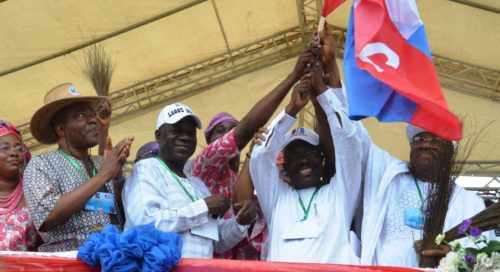 A former Chairman of the People’s Democratic Party (PDP)in Lagos, Mr Moshood Salvador on Saturday formally joined the All Progressives Congress(APC) and declared his old party dead, while promising to help APC actualise its electoral goals.

The ex-PDP chairman had on August 27 announced his exit from the PDP following what he called irreconcilable differences with some elders of the party.

At an elaborate ceremony at the Agege Stadium, Salvador, other chieftains and many members of the opposition party officially joined the APC.

Some of those who joined with him were Mr Gbenga Oshinowo, a former senatorial aspirant of the PDP, Mr Idowu Adesanya, a former member of the PDP Elders’ caucus in the state and Mrs Margaret Igwe, a former national officer of the party.

They were received by the state Chairman of APC, Alhaji Tunde Balogun and other members of the party executive.

Addressing a large crowd of APC party faithful at his official defection, Salvador said his joining the APC meant that the state was now a one-party state.

He said the PDP was finished in the state as he had collapsed the entire structure of the party he once led into the APC.

Salvador said he was excited to be back in the fold of the progressives, which he once belonged, adding he would do everything humanly possible to help APC grow in the state.

“I thank you so much for receiving us with this glamorous celebration.

”Lagos State is now a one party state. When we add the votes of APC and PDP in the 2015 elections, it will give us 98.08 per cent while the remaining other parties got 0.1 per cent.

“They are insignificant when we talk of political parties in Lagos State.

“The only two existing and dominant parties in Lagos State are the APC and PDP. Now that PDP has transformed into the progressives family, no other party in Lagos.

“My responsibility, aim, goal and target in Lagos State is for APC is to have 99.5 per cent votes for APC in Lagos.

” Write it down, it is a target, it is an assignment and we are ready to work towards it and achieve it. That will be my contribution to support my able Chairman, Alhaji Tunde Balogun.

“I will do all humanly possible to achieve this goal so that all APC will have 99 per cent of all the votes cast in Lagos State,” he said.

According to him, Lagos State is a pace setter and any state in the South west that refuses to align with the ruling party in the region is wasting its time.

He appealed to the people of Osun to vote for the APC candidate in the Sept. 22 governorship election to continue to enjoy the dividends of democracy.

Salvador urged his supporters to throw away their PDP cards and register with APC across wards and local government areas in the state.

Earlier, Balogun said the APC was glad to have Salvador and his teeming supporters in its fold.

He said the defection of the ex-PDP chairman into the party showed that the APC was the party to beat and that PDP had been completely depleted.

Balogun described Salvador as an accomplished politician who he said would add great value to the APC.

In his remarks, a chieftain of the party in the state, Sen. Anthony Adefuye expressed delight that APC was waxing stronger both at the state and federal level.

He said with the momentum the ruling party was gathering by the day, he had no doubt that the APC would surpass PDP’s 16 year rule to govern the country for 32 years.

He commended Salvador for making the decision to join the APC ,saying the PDP had been buried with his defection.

“Hon. Salvador in Lagos is the backbone of PDP. What we are doing today is the wake of PDP and by tomorrow, we will bury the party. The party is dead and buried in Lagos State,” Adefuye said.

The chieftain also expressed the confidence that the APC would win the Sept.22 Osun gubernatorial election.

He urged party members to redouble their dedication to the party to take it to greater heights.

The high point of the ceremony was the open shredding of PDP membership cards by the defectors.