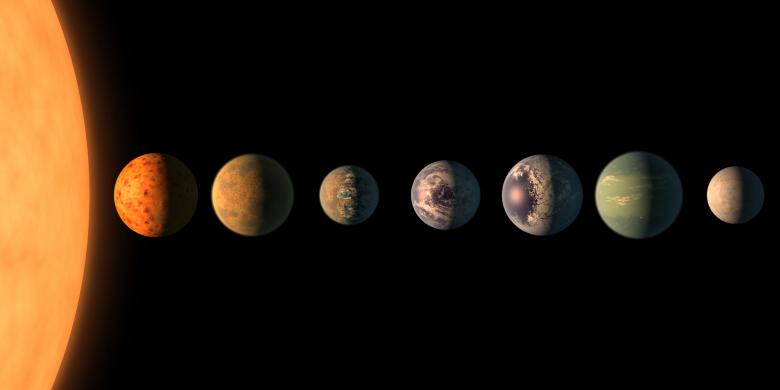 Artist's concept shows what each of the TRAPPIST-1 planets may look like, based on available data about their sizes, masses and orbital distances. REUTERS/NASA/JPL-Caltech

SpaceX has signed the world’s first private passenger to fly around the moon and will announce details on Monday, the company said.

The individual will travel in a giant spacecraft that SpaceX has designed to fly to Mars.

SpaceX said that the moon mission “is an important step toward enabling access for everyday people, who dream of travelling to space.”

SpaceX founder and Chief Executive, Elon Musk, will fill in other details in making the announcement on Monday evening.

“No matter, who SpaceX has signed for its “BFR Lunar Mission,” the company is hyping it as an epic trip. BFR is shorthand for Big Falcon Rocket.

“Only 24 humans have been to the Moon in history,” SpaceX said on Twitter, adding that no one has visited the moon since the last Apollo mission in 1972.

SpaceX announced in February 2017 that two people had signed up for a trip around the moon it aimed to launch before the end of 2018.

That mission was to use SpaceX’s Dragon capsule and Falcon Heavy rocket.

The flight never materialised but SpaceX representatives told the Wall Street Journal in June that such a mission remained in the company’s plans.

“It is possible SpaceX will release a timeline on Monday and announce whether the passenger is one of original people, who signed up for the original flight,’’according to Space.com.