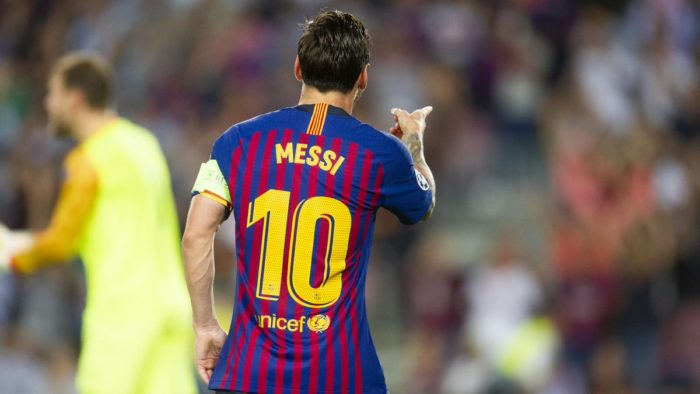 The impressive Ousmane Dembele spun to lose two defenders and blasted home Barcelona’s second from outside the box.

According to BBC, the 10 men got a fourth goal when Suarez picked out Messi, who guided the ball past goalkeeper Jeroen Zoet from 15 yards.

The other game in Group B saw Inter Milan come from behind to beat Tottenham 2-1 at the San Siro.

Messi, now Barcelona’s captain after Andres Iniesta’s departure, looks to have put another disappointing World Cup behind him – he scored once as Argentina lost in the last 16 in Russia.

He has now scored seven goals in six games this season, as well as going close with another free-kick in the second half and creating good chances for Suarez and Roberto.

All his goals were excellent. First he whipped in his eighth free-kick of 2018 – right into the top corner beyond Zoet’s reach from 20 yards. He sweetly struck home Rakitic’s lofted ball and late on met Suarez’s pass to add a third.

He has now scored 104 goals – including eight hat-tricks – in the competition and has netted in a 14th consecutive Champions League campaign, a joint record with Real Madrid legend Raul.