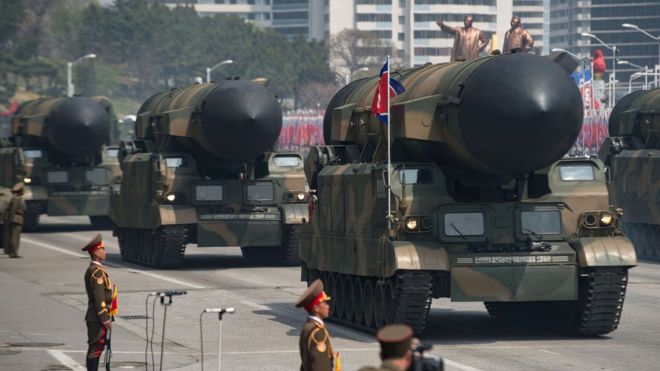 There are signs that North Korea is “still maintaining and developing its nuclear weapons and ballistic missile programmes”, a UN envoy has said.

Ms Rosemary DiCarlo, UN Under-Secretary-General for Political Affairs, disclosed this at the Security Council meeting on Non-proliferation and the Democratic People’s Republic of Korea (DPRK) also known as North Korea.

This is just as the United States Permanent Representative to the UN, Ms Nikki Haley and her Russian Federation counterpart, Vassily Nebenzia, engaged in war of words over the progress of North Korea’s nuclear weapons programme.

The briefing on the implementation of sanctions on North Korea, was requested and chaired by the United States Ambassador to the United Nations and the UN Security Council President for the month of September.

The 15 Council members sat to consider the latest midterm report of the Panel of Experts of the 1718 DPRK Sanctions Committee, which was established to oversee the relevant sanctions relating to North Korea.

DiCarlo welcomed the positive announcements made by North Korea, with regards to ending nuclear testing, in April and May, including DPRK’s leader Kim Jong-Un’s stated commitment to the denuclearisation of the Korean Peninsula.

She, however, added that Yukiya Amano, the Director General of the International Atomic Energy Agency (IAEA) reported in May that the Agency had observed nuclear signatures consistent with the continued operation of a plutonium production reactor, radiochemical laboratory and alleged uranium enrichment facility in Yongbyon, North Korea.

In an IAEA statement released on Monday, Amano said that “the DPRK’s nuclear activities are clear violations of relevant UN Security Council resolutions and are deeply regrettable”.

“The Agency continues to enhance its readiness to play an essential role in verifying the DPRK’s nuclear programme if a political agreement is reached among countries concerned.”

DiCarlo recalled that in 2017, the Korean Peninsula was at the centre of world concerns over peace and security, in the face of DPRK’s nuclear testing and threats.

She noted that the unity of the Security Council helped create the opportunity to engage diplomatically, reduce military tensions and re-open channels of communication.

The U.S. envoy, Haley, however, reiterated claims made by the U.S. Mission to the United Nations, on Sept. 13, stating that Russia had pressured the panel to alter its independent report, which included sanctions violations implicating Russian actors – and accused Russia of “working across the board to undermine the sanctions regime.”

In response, Nebenzia, the Russian Federation’s Ambassador to the United Nations, claimed that the United States was using the meeting to try to “impose on the international community their own vision of the situation.”

The Russian envoy said that the work of the Panel of Experts had become “increasingly politicised” and that the first version of the report did not meet the required standards of objectivity and impartiality.

Nebenzia said the Russian Federation and other members of the North Korea Sanctions Committee, “expressed a number of comments which were reviewed correctly by the Experts, and then taken on board, when they transferred the report to the Security Council.”